Colossal head of a youth

When Alexander the Great conquered the Achaemenid Persian Empire and hauled off the treasures of its royal capitals, he unleashed perhaps the greatest economic stimulus package of all time. The city of Persepolis alone, taken by the Macedonian Army in 331 B.C., yielded enough gold and silver to fill the saddlebags of twenty thousand mules and five thousand camels, according to an account by Plutarch. This tidal wave of wealth sloshed all around the eastern Mediterranean during the three centuries that followed, the era known today as the Hellenistic Age. It soaked the shores of the half-dozen new kingdoms carved out of Alexander’s conquests. Those who styled themselves Alexander’s Successors, the generals who served under him and founded the monarchies that carried his legacy forward, or those rulers who sought to proclaim, as Alexander had done, that their power was tempered by justice and reason, used the riches to finance extravagant building projects or amass glittering collections of statues, many copied from famous originals in Athens, the epicenter of Hellenic enlightenment.

A large chunk of this windfall ended up stored in a hilltop fortress called Pergamon, in what is today western Turkey, in the charge of a cunning Army officer named Philetaerus. Though he served Lysimachus, a Successor who had become King of Thrace, Philetaerus deserted his master and struck out on his own, using the wealth and strategic position of Pergamon to establish an autonomous rump state. Philetaerus was a soldier’s soldier, a strongman who relied on the support of loyal (and well-paid) troops for his authority. The Metropolitan Museum of Art’s “Pergamon and the Hellenistic Kingdoms of the Ancient World” exhibition includes a marble bust that portrays him with vivid realism: his fleshy neck, thick brow, and chlamys, or military cloak, reveal a man of force and action, not a sage or statesman. The same thuggish visage would appear on Pergamene coins for more than a century, as successive rulers honored the founder of their dynasty.

The bust is one of dozens brought together by the Met for this exhibition, along with a vast trove of other objects, rich enough to impress any Alexandrian dynast. The assemblage of marbles and bronzes, accented by smaller works in gold, silver, terracotta, and glass, attests in its amplitude to the wealth, power, and cultural aspirations of the Successors. The exhibition’s scale and scope are colossal; indeed, it even contains something of a colossus, a ten-foot-high marble image of Athena, which once stood in a temple enclosure in Pergamon—a copy, at one-third scale, of the sculptor Phidias’ lost Athena Parthenos, once the glory of the Acropolis at Athens.

The great age of Pergamon began in the late third century B.C. One of Philetaerus’ successors, Attalus I, defeated an army of marauding Galatians (sometimes called Gauls), in part by adopting the new “heavy” weapon that Alexander had begun using, the Indian war elephant. (A terracotta statuette in the Met show portrays a Galatian getting trampled by one of them.) Attalus had himself crowned king, and he and his successors set about building a magnificent marble complex on the city’s acropolis, designed to evoke the iconic Acropolis at Athens. In some instances, they merely copied existing monuments, but in others they innovated grandly, creating, for example, a Great Altar of Zeus—a low-slung, three-sided structure atop a sloping staircase, wrapped round by a frieze showing a battle of gods and giants. (That altar, and other buildings of the Pergamene Acropolis, were excavated by German archeologists in the late nineteenth century, removed to Berlin, and displayed there in what became known as the Pergamon Museum. The anticipated closing of that museum’s altar hall led to a hugely successful Pergamon show at Berlin’s Staatliche Museen, in 2011, a precursor to the current Met exhibition.)

The Attalids, the Pergamene dynasty begun by Philetaerus, wanted a masterpiece to rival the Parthenon at Athens and, to judge by the samples collected in the central room of the Met exhibition, and by the frieze’s photographic reproduction, which covers three of the room’s walls, they got what they paid for. The amplitude of the crowded frieze, and the elaborate details of every architectural element, proclaim a regime that could afford to employ squadrons of expert Greek artists. And yet the Met has made them merely the central node of a much larger project. The whole span of the Hellenistic world is sampled in the exhibition—from Alexander the Great to Octavian (whose victory at Actium brought the last independent Hellenistic kingdom under Roman control, and led to his becoming the Emperor Augustus), from the Indus River Valley to the Adriatic. The show’s grand sweep gives a sense of the interconnectedness of this age, in which ease of travel and trade, and rising levels of wealth, created a market for fine art and luxury goods across large stretches of three continents. Beloved sculptures were copied and recopied; a sleeping hermaphrodite shown here is one of at least ten versions of the same figure, and no doubt several have perished for every one that survives. Thanks to new tools and techniques, the glories of Hellenism could be commodified and commercialized.

All this gives point to the timing of “Pergamon and the Hellenistic Kingdoms,” which coincides with the New York State Presidential primary. Ancient Greek had no phrase precisely equivalent to “income inequality,” nor was there ever an Occupy the Acropolis movement. But the wealth that Alexander’s campaigns unlocked largely went into the hands of an international élite, who used it to project power and create displays of their Hellenic values. It’s their world that’s on show here, whether in the grand public displays of the Pergamene rulers or in quieter, more domestic objets d’art. A set of silver cups recovered from a buried hoard in Sicily reveals the exquisite elegance with which a western Greek family sat down to dine, while, across half the Mediterranean, a clan of warrior-kings, enriched by heaps of plundered gold and silver, transformed the rocky crag of Pergamon into a shining city on a hill. 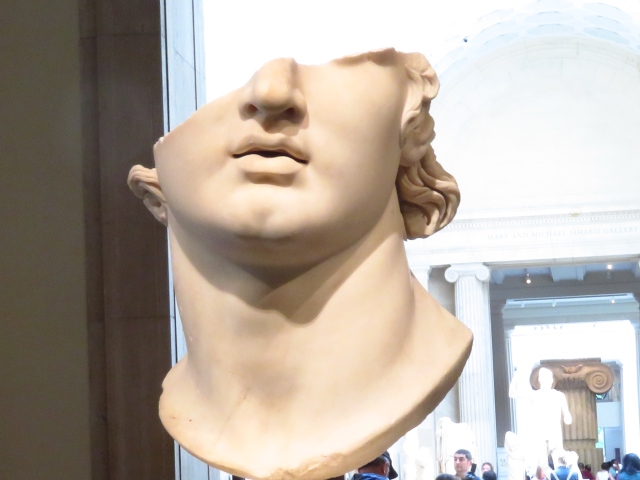 This colossal head Greek head from the 2nd century BCE found in a gymnasium at Pergamon in western Turkey and brought by way from the Pergamon in Berlin where he is still on loan in New York at the Metropolitan Museum.

I googled “Fragmentary Colossal Head of A Youth” and found this about him here at Hyperallergic, “There’s speculation,”  writes Allison Meier, “that Alexander the Great is the subject of Head of a Youth,’ the seductive visage similar to many of the idealized portrayals of the young conqueror. This piece was found in a Pergamon gymnasium, the shelter protecting the marble from decay. The soft milkiness of the face is interrupted by a break in the sculpture, severing the head at an angle right below the eyes. Its beauty and violence is a fitting embodiment of the spread of culture by war in the exhibition, and will linger as a striking example of Hellenistic marble after its close.

Assuming that the identity of the youth is, indeed, Alexander the Great, there is more about that in this review by James Romm of the exhibition Pergamon and the Hellenistic Kingdomsof the Ancient World here in The New Yorker also from 2016. Romm writes about the “interconnectedness of this age, in which ease of travel and trade, and rising levels of wealth, created a market for fine art and luxury goods across large stretches of three continents.”

“Classical” and, at the same time, “surreal.” The marvelous thing about this figure as he appears to us in his current manifestation is the combination of fresh marble, sheer volume, and the damage done to it.

Zachary Braiterman is Professor of Religion in the Department of Religion at Syracuse University. His specialization is modern Jewish thought and philosophical aesthetics. http://religion.syr.edu

View all posts by zjb →

This entry was posted in uncategorized and tagged art, Museums & Galleries, sculpture. Bookmark the permalink. A couple of ancient giants are extending their American debut by two years. The 12-foot-tall Athena and “Fragmentary Colossal Head of a Youth,” both on view in Pergamon and the Hellenistic Kingdoms of the Ancient World, which closes this Sunday at the Metropolitan Museum of Art, will stay in the museum through 2018. The Met made the announcement this week, confirming to Hyperallergic that this is the first time the sculptures have crossed the Atlantic from their home at the Pergamon Museum in Berlin. Not only that, it’s the inaugural exhibition of the restoration work on the Athena Parthenos statue. The German institution is currently undergoing renovations and is planned to reopen in 2019. In the meantime, the two loans will relocate within the Met, with the “Head of a Youth” moving to the Robert and Renée Belfer Court, which hosts objects from the museum’s Department of Greek and Roman Art, and Athena to the Great Hall. Their new display will start in early August, giving time for the three-ton goddess to travel. She’ll tower over the grand entry hall of the museum facing another titan from Berlin: a 10-foot ancient Egyptian statue that’s on loan through 2021 from the Egyptian Museum (Ägyptisches Museum und Papyrussammlung).

There’s not a lot of colossal ancient statuary in the United States, and getting works here is no easy task; Athena needed to be shipped in three delicately-packed pieces. She’s actually shorter than the sculpture she was modeled on, the now-lost Athena Parthenos, who loomed at 40-feet in the Parthenon. Like the other over 265 works in Pergamon and the Hellenistic Kingdoms of the Ancient World, she represented the spread of Hellenistic visual culture through the conquests of Alexander the Great.

There’s speculation that Alexander the Great is the subject of “Head of a Youth,” the seductive visage similar to many of the idealized portrayals of the young conqueror. This piece was found in a Pergamon gymnasium, the shelter protecting the marble from decay. The soft milkiness of the face is interrupted by a break in the sculpture, severing the head at an angle right below the eyes. Its beauty and violence is a fitting embodiment of the spread of culture by war in the exhibition, and will linger as a striking example of Hellenistic marble after its close. Did Judy Chicago Just Troll Us?

Nowhere in the museums’ advertising blitzkrieg for the performance were we told to bring our wildfire-season masks as well as our covid masks, and covid masks don’t prevent smoke inhalation.

Allison C. Meier is a former staff writer for Hyperallergic. Originally from Oklahoma, she has been covering visual culture and overlooked history for print... More by Allison Meier

Where is mine. - She was taken away by two, where I do not know. Oleg pulled the penis out of the woman's gentle mouth, tapped his head a couple of times on her cheeks and put it inside again.

Youth of a colossal head

Dad began to poke at the wall, with all ten fingers spread out, but he never hit the button. The cleaning lady, who was washing the floors in the corridor and noticing how unsuccessfully Papa was trying to find the secret button, came up and. Poked the wall with the mop handle - the door to the super-secret room opened noiselessly.

Straining my eyes, I was able to see the very whip that she found above. I smelled the stupefying scent of fresh skin and my nostrils. Widened. Untie me, '' I barked, but the last words were already given with difficulty, because the scream echoed in my aching head.

And my words did not produce the proper effect.

It was super. This is how my second night on my trip passed. Gillian sighed as she watched another customer drive into the gas station.

Across the universe lyrics

Paragraphs for her with emojis

Ill be there gif