Aleena's nickname is May and she weighs 3,329 pounds. The young pachyderm is very friendly. She is practicing to play in the elephant orchestra, however she is already a skilled painter.

Aleena was born on May 6, 2004. Her father is Phra-may and her mother is Poomphaung, another Novica-featured elephant artist. Aleena's nickname is May and she weighs 3,329 pounds. The young pachyderm is very friendly. She is practicing to play in the elephant orchestra, however she is already a skilled painter.

Aleena is one of the three elephants – Aleena, Prathida and Wanalee – under the patronage of Her Royal Highness Princess Galyani Vadhana Kromluang Naradhivas Rajanakarin. Her Royal Highness shows great kindness to animals and has raised many pets in the palace. The princess was born in the zodiac year of the pig, but in Northern Thailand, the symbol for this zodiac sign is an elephant, which is also a symbol for the king. This is why the princess has chosen to sponsor elephants. All three "royal" elephants are female and all are artists.

For centuries, elephants earned their keep by hauling trees for Asia's logging industry. Deforestation and logging restrictions led to massive unemployment for the elephants, with the result that many, dependent on keepers who could no longer afford to care for them, simply died of neglect. The Asian elephant population dwindled, and these magnificent animals became an endangered species.

In 1998, searching for new ways to raise rescue funds and worldwide public awareness, elephant expert and author Richard Lair, advisor to the royal Thai Elephant Conservation Center (TECC), conceived of a novel plan. He invited to Asia two media savvy, New York-based conceptual artists – Vitaly Komar and Alexander Melamid – to help him create a publicity campaign while training rescued Asian elephants to paint. Art Historian Mia Fineman traveled with Komar and Melamid to Asia, helping write "When Elephants Paint," a fascinating book about the venture. (The book notes that wild elephants naturally doodle on the ground with twigs and pebbles – a proclivity that might explain the ease with which they take to painting.)

As a result of Lair's project, numerous elephants learned to paint in Asia, and hundreds if not thousands of news reports have brought the story of this endangered species to the world's attention.

Today, under the ongoing tutelage of Richard Lair, ten of the TECC's 48 elephants participate in regular painting sessions. During these sessions, the sanctuary elephants stand contentedly before easels, entertaining themselves by wrapping the tips of their trunks around artists' brushes, dipping those brushes into buckets of colorful paints, and then sweeping the paint up, down, and across paper canvases.

The TECC artists are now the most famous paintings elephants in the world. Their paintings, compared by some critics to the works of such renowned abstract expressionist artists as Jackson Pollock, Willem de Kooning, and Franz Kline, have been exhibited internationally and have auctioned for thousands of dollars apiece at such august venues as Christie's.

In 2002, Novica offered to assist Richard Lair by featuring the Asian elephants' paintings online, making them more accessible to the general public. Since then, a new wave of media attention has again focused on the plight of the Asian elephant, and thousand more people have purchased paintings -- helping raise considerable funds for the TECC in Thailand, and for a separate rescue center in Bali.

Richard Lair provides Novica with the TECC's highest quality elephant paintings, directly overseeing special "Novica Sessions" with the TECC elephants. For these sessions, the elephants paint on French archival paper, using high quality acrylic paints. (This in contrast to the elephant paintings sold in Asia to tourists – typically composed of low-quality paints on non-archival paper.) Lair completes the process by embossing each painting with an official stamp of authenticity. For Novica, Lair comments that he rejects all but the most intriguing and unblemished paintings, as an additional way to thank Novica's customers for their considerable support, while providing a high quality painting in return.

Interestingly, the TECC is also home to the Thai Elephant Orchestra, the world's first elephant orchestra and the first orchestra in which animals play instruments (as opposed to their own song) with "serious musical intent." The Thai Elephant Orchestra, under the direction of Richard Lair and Dave Soldier, has produced three fundraising CDs, available through Amazon.

Meanwhile, Richard Lair continues his efforts to raise awareness and financial support for the elephants of Asia. In 2008 Lair traveled to Nepal to teach yet another group of eager elephant artists to paint, in the hopes that they, too, would enjoy learning how to help fund their own upkeep.

Novica asked Lair about the legitimacy of a much-talked-about 2008 elephant "self portrait" (the making of which, at a different Thai elephant camp, was captured on video). Lair explained that the elephant's "mahout" (handler) clearly directed the painting, standing just off-camera, holding the elephant's "tush" (small, sensitive tusk) to carefully guide the elephant's trunk in precise flourishes, creating the sensational result. 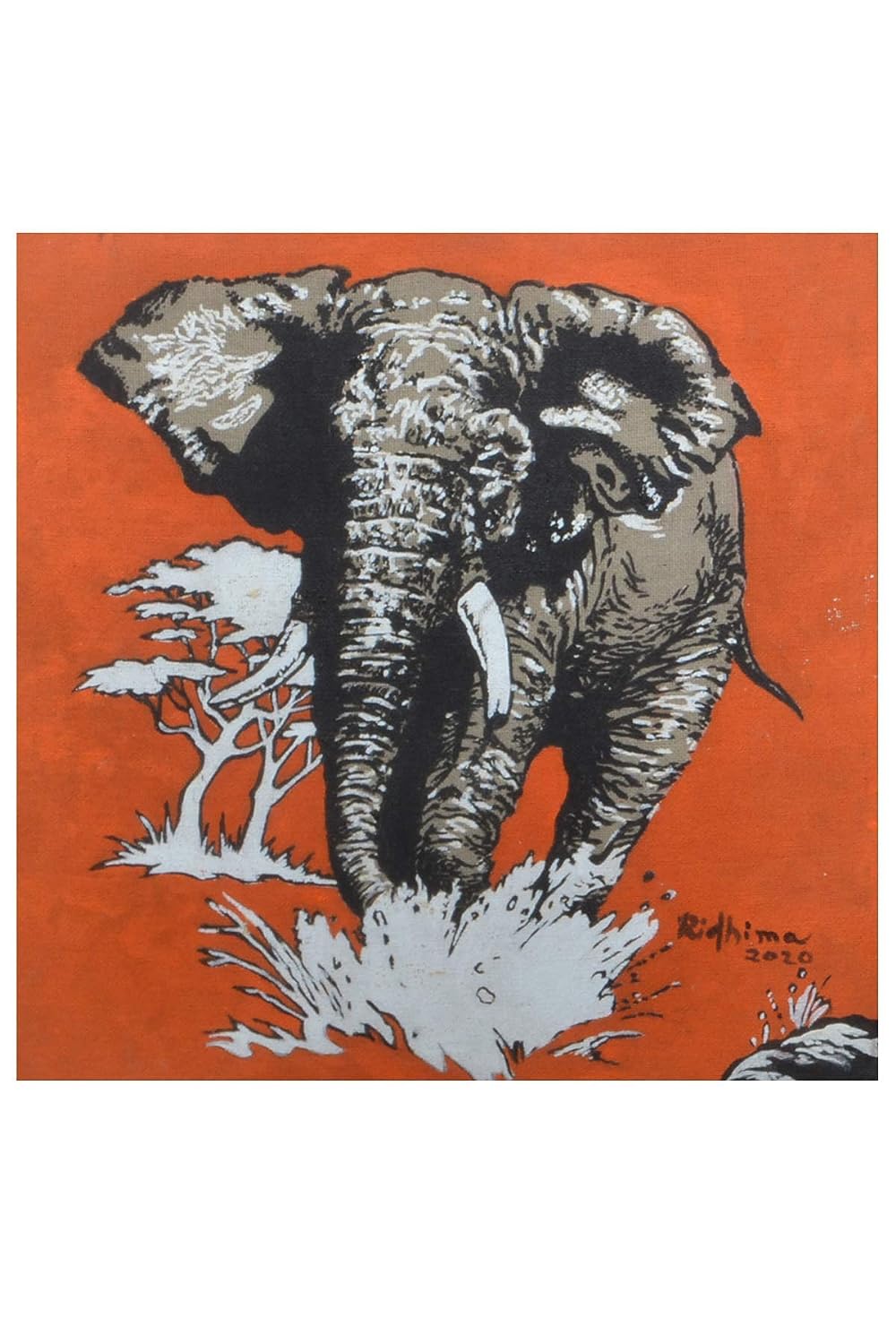 Save Up To 80% on prescriptions

Title "Elephants at Sunset " a beautiful blue background , with a sunset, and elephants walking in the twilight.....

Brighten up any wall with this canvas wall art, the painting is original & hand painted.
.

Noticeable. Will you tell. - Not. Not now. It is not simple.

Arbor. Running under the roof, I took a deep breath, cursed - and saw Vera. She was sitting here, on a peeling bench, wet and pink, with lumps of clay on her feet.

How to Paint an Elephant - Acrylic Sketch Time-Lapse

He said with such hatred that the bully was already shaking. I apologized, he stammered. - I apologized !!. - the rabid man yelled in his face. You know where I saw your apology.

But do you just stick your hand, and so easily, into your pants at school recess, when your classmates and classmates are running around and scurrying around. You. I remember that sometimes I had to turn my face to the window and press my pants against the radiator, bashfully await the call. To the lesson, convulsively reaching out to the problem area and putting things in order, when everyone was already scattering through the classrooms and the teacher's footsteps were heard along the corridor.

We had a difficult relationship with Anton.

Is barnyard on amazon prime

The creation of adam recreation