Dota 2 side shop: Why it is among the features the community misses the most

In almost a decade of development, much of Dota 2 has changed dramatically since its early days.

Most of the major patches are remembered by the new mechanics added to Dota 2. But IceFrog does not hold back from completely removing features that are old enough to become iconic. The side shop probably tops the list of these old-school Dota 2 relics.

Side shops are not even unique in that regard. The secret shops, located near either edge of the river, are still extant in Dota 2.

In fact, archives of the earliest patches in the old DotA reveal yet another shop. The long-forgotten ‘mid lane shop’. As anyone would guess, this was primarily handy for mid laners, mostly offering consumable items like Clarity, as well as two old utility items, ‘Wand of Silence’ and ‘Negation Staff’.

The two mid shops were, however, removed in patch 5.3 - long before the makeshift competitive scene of the first DoTA had even started to develop. The side shops, however, are a different tale altogether.

Unlike the obscure mid shop, the inventory of the side shop was much larger, so much so that entire items could be completed by purchasing components from the side shop alone. These included big mid-game items like Blade Mail and Vanguard.

The availability of the Blink Dagger in the side shop also led to some clutch gameplay moments back in the day. A juking player near the shop could purchase the Blink Dagger in a moment of crisis - for example, when they were about to be finished off by a Sniper’s Assassinate - to disjoint the danger with a single Blink usage, and then sell the item in time for a full refund.

Although an extremely situational move requires a good level of skill and reaction timing, the possibility of plays like this is what makes the side shop such a fond memory for the Dota 2 community.

The community's nostalgia over the side shop was stroked by the 2020 Battle Pass with a Sideshop section for recycling cosmetics. Ironically, even this ‘side shop’ was removed after an exploit regarding cosmetics cycling got popular. 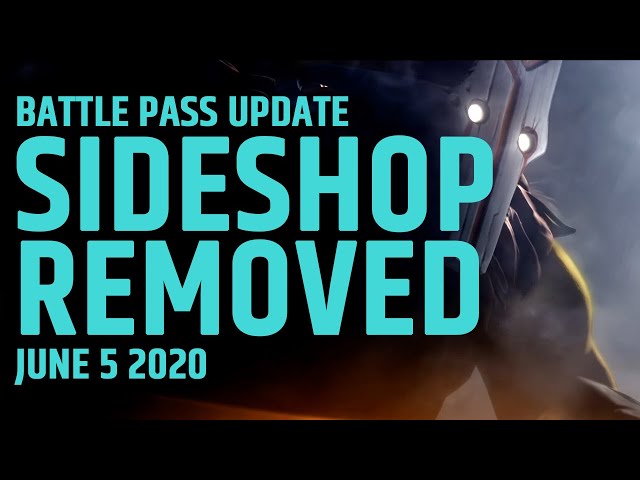 The removal of side shops in patch 7.23

The side shops were removed as part of the Outlanders update, the same patch that added neutral items to the game. The lack of easy item accessibility was addressed by getting every player their own courier. The side shop was essentially replaced with a new Dota 2 mechanic, the ‘Outposts’.

Dota 2 also has a reputation of bringing back previously removed elements. Community-favorite items like the Ring of Aquila were recycled as neutral items. Now that outposts are relocated to the jungles, could the side shop be brought back in the upcoming 7.30 patch? The answer, sadly, is an uncertain ‘maybe’. 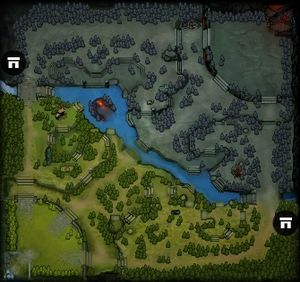 The Side Shops are located near the bottom lane on the Radiant side, and the top lane on the Dire side. These shops sell certain items away from base, allowing heroes to continue laning for longer periods without having to return to base or wait for the Courier.

Notable items such as Town Portal Scrolls are conveniently sold here, allowing for quick teleport for escaping or defense with the common juke spots around the shop.

Radiant Side shop range is:

Dire Side shop range is:

The following items can be completed with items solely from the side shop.

This article or section contains content that has been removed from the game or store, or has never been released. It exists solely for archival purposes.

The Side Lane Shops were two extra shops located on the

Radiant side of the bottom lane and the

Dire side of the top lane, near the river. The Side Lane Shop sold certain items away from base, allowing heroes to continue laning for longer before returning to base.

All items found at the Side Lane Shop could be bought at the main Base Shop, except

Vitality Booster, which are also found at the Secret Shop.

The top Side Lane Shop was tended by Quirt; the bottom by Sithil.

These items can be completed solely with items from the Side Lane Shop:

Nullifier can be built from items purchased at just the Side Lane Shop and Secret Shop.

SIDE SHOPS REMOVED AFTER UPDATE
Update RIGHT NOW_ removed side shop?
For all?
The gold earned from side shop + achievements need to be updated.
This is unacceptable. In-game currency and achievements to use the side shop like dota underlords now has no purpose or meaning to gain the Battle pass points required.

The Side Shop removed from the Dota 2 Battle Pass

The Side Shop, one of the features in this year’s Dota 2 Battle, is already a thing of the past. It took Valve less than two weeks to remove it.

This year’s Dota 2 Battle Pass was released on May 25 and it brought a variety of new features along with some old ones we all love. The Side Shop was one of the newly added mini-games where players collected heroes just like in Auto Chess/Underlords. At any time the heroes in question could be traded for an in-game currency which determined the rewards you receive upon opening a side shop chest. Not a lot of players liked the idea behind the Side Shop and some even called it “a casino within a casino”. The gold used to purchase heroes in the Shop was limited and there were only limited ways to get more. One of those was by recycling unwanted items from this year’s treasures. This is where fans further criticized Valve, as in previous editions recycling of Immortal items led to either getting extra levels on your Pass or progress towards another chest.

It didn’t take much convincing and Valve followed the player demand. Today the Side Shop was removed and that makes it the shortest every feature of any Battle Pass we’ve seen. Here’s the official statement:

In this update we are rolling back two features to be like they were last year: Weekly Wagering & Recycling/Sideshop.

The amount of weekly battle points available from wagering is now the same as last year.

Sithil and Quirt’s reimagined Sideshop has been shut down. Immortals can now be recycled using the same system as last year. For players that have already recycled immortals, the system will automatically back fill your progress on this replaced system and grant you additional immortal treasures as appropriate. Any rewards previously earned through the Sideshop will remain in player inventories, and if you still have gold and wish to continue rolling in the Sideshop, you can use the dota_show_sideshop command.

As part of this update we are also removing ticketing requirements for the Gauntlet.

Besides the side shop, wagering returns to the way it was last year and the Gauntlet no longer requires tickets. Both are acceptable changes and hardly anyone will be unhappy with that. Recycling 4 Immortal items will grant you another treasure as well as a Rylai’s wheel spin. Valve have been more responsive than ever in 2020 and we can only hope that they’ll continue the trend.

Stay tuned for more Dota 2 news and check out EarlyGame for more content.

We have already drunk wine, now we are polishing with beer. Everything is a little more tipsy. Best case.

Said Roman and pulled a member out of Lena's mouth. Roman undressed, tore off Lena's T-shirt and skirt and lay down on the sofa. - Sit down. He commanded. Lena sat down on top of his penis and began to gallop frantically in a fit of another orgasm.

Pictures of the navy

Dwarf hamster near me

When is petco adoption day