Charles Bell was leaving the downtown Denny’s restaurant on Long Beach Boulevard at about 3 a.m. March 23 when he and three friends were shot in the parking lot.

Three of the men survived, but Bell, 33, of Compton, died at the scene in Long Beach’s fifth gang-related killing of the year.

In February, concerned residents of North Long Beach gathered for a town hall meeting to address three gang-related killings that occurred within less than two weeks.

Police have since beefed up patrols on the north side.

“This is more than just a police issue, this is a community issue,” Councilman Steve Neal said at the meeting. “We want to convene everyone and talk about how we can work together to solve the problems.”

Meanwhile, in central Long Beach, residents gathered in January for a meeting to address two gang shootings in the McBride Park area near Poly High School.

Neighbors at that meeting said children were afraid to play in the streets.

While violent crime in Long Beach is at a 41-year low, gang-related killings were on the rise last year after three years of record lows.

Officials said the spike in gang violence could be due to several factors, including cuts in police staffing and more newly released convicts on the streets as a result of the state’s prison realignment.

As gangs remain an ongoing problem in the city, law enforcement is increasingly using new technology and techniques to reduce the violence.

Los Angeles County has long been called the “gang capital” of the nation.

In Los Angeles alone there are an estimated 450 gangs and 45,000 gang members, according to the Los Angeles Police Department.

Long Beach is home to about 55 known gangs and 6,000 gang members, according to the Long Beach Police Department.

In a city of roughly a half-million people, that means about 1 in every 100 is affiliated with a gang.

In 2011, the Centers for Disease Control and Prevention analyzed five-year data from large cities in 17 states and named Long Beach as one of the country’s top five cities with the highest number of gang homicides.

In Long Beach, about 40 percent of all homicides are classified as gang-related, according to Long Beach Police Department data.

The 1990s were an especially violent era, with an average of about 26 gang killings each year.

Long Beach police Cmdr. Don Wood, of the Gangs and Violent Crimes Division, said cuts in police staffing could be a reason for the increase.

In a round of budget cuts in 2012, the city slashed the department’s gang unit by more than half, from 44 personnel to 20.

Today, there are 26 personnel in the gang unit, including seven officers funded through one-time money designated for fiscal year 2014, the department said.

Wood said the cuts mean fewer officers on the streets.

“Gang members and criminals recognize the lack of coverage and are more active,” Wood wrote in an email. “The visibility of officers in the field is a powerful deterrent from committing crime.”

Despite the rise last year, Long Beach today is a much safer city than it was in the 1990s, police said.

“Ten years ago you wouldn’t drive down this street without backup,” said Long Beach police Detective Chris Zamora as he drove through the once-infamous Carmelitos housing project in North Long Beach.

On a recent Wednesday afternoon, the public low-income complex, once a hot spot for violence, was quiet as a trio of small girls rode scooters on the sidewalk.

Zamora, a local gang expert who has served in the Police Department for 10 years, said fewer gang members congregate in the streets and parks today thanks largely to the city’s gang injunction, which was strengthened in 2010.

As a result, he said, the streets are much quieter.

Three main gangs dominate the Los Angeles County landscape – Bloods, Crips and Sureños, who are controlled by the Mexican Mafia.

In Long Beach, dozens of smaller clique gangs are mostly under the umbrella of either Crips or Sureños.

The largest and oldest include East Side Longos, Barrio Pobre and Insane Crips.

Zamora said much of the conflict comes from the city’s diversity and location.

Outside gangs from Los Angeles and other cities frequently try to infiltrate Long Beach because of the city’s density and young population.

“We have a lot of different gangs in Long Beach, not only because it’s a diverse city, but also we’re a midway point to a lot of other cities,” Zamora said. “This is an area that’s very popular. A lot of people would love to claim Long Beach as their territory.”

Though many of the gangs are under the Sureños, they constantly fight each other over resources and territory, Zamora said, adding that Mexican Mafia bosses prefer it that way.

“The people at the top don’t care who’s fighting as long as they’re getting their money,” he said. “It’s almost encouraged because it’s that divide-and-conquer mentally.

“The Mexican Mafia is just brilliant at it,” he said. “Few organizations control so many people.”

In a disturbing trend, police said many gang members are keeping a lower profile, choosing not to get tattoos or wear clothes that would identify them.

Gangs also are becoming more innovative in the way they operate, moving from auto theft and robberies to identity theft and forgeries, police said.

Wood said his team frequently uses social media such as Facebook, Twitter and Instagram to monitor possible threats, gather information and stop violence before it starts.

Another tool – gang injunctions, which are court orders preventing known gang members from participating in certain activities – has long been established in Long Beach and other cities in the county.

In a gang-injunction zone, gang members identified on a list are barred from associating with each other or owning cellphones.

In 2010, Long Beach City Prosecutor Doug Haubert expanded the city’s gang injunction program to include any gang under the Sureños umbrella.

The program got a boost from new technology developed by Long Beach-based Laserfiche that allows all patrol officers to access the gang-injunction list through their car computers.

Zamora, who helped design the gang-injunction map, said the city goes through a two-step screening process to identify only the most active gang members. More than 500 people are identified on the list.

The injunction also includes an “Opt Out” program where people can work to get off of the list through community service and other efforts.

So far, seven people have gone through Opt Out, with 20 more in the process.

Haubert said he believes the gang injunction has been an effective tool in Long Beach.

“We can’t arrest and prosecute our way out of a gang problem,” he said. “As long as it continues to work, I’m going to keep doing it.”

As for police staffing, city officials said they might consider expanding the gang unit now that Long Beach is out of its fiscal crisis.

Vice Mayor Robert Garcia, who chairs the City Council’s public safety committee, said the city might expand the gang unit in the next fiscal year.

While Long Beach occasionally will see a “bumps in the road” when it comes to crime, the city today is a very safe place, said Garcia, who’s running for mayor.

“The city is absolutely moving in the right direction,” he said. “We’ve had to scale back and make some very tough choices, but we want to look into making our gang unit whole again.”

The largest industry in the area is the combined Ports of Long Beach and Los Angeles. There is also a large Shell Oilrefinery in nearby Wilmington and the massive Intermodal Container Transfer Facility (ICTF) on the neighborhood's western edge. The neighborhood is a mix of older residential housing, apartments and townhouses, and industrial buildings. The primary thoroughfare is Santa Fe Avenue, which runs north to south through the center of the neighborhood. The neighborhood has three official parks, including Silverado Park. In 2010 a renewed 12.39 acre park, named after Rear Admiral Isaac C. Kidd, was completed next to Cabrillo High School.

West Long Beach has a history of Japanese Americans starting with fishery workers who once lived on Terminal Island in the turn of the 20th century.[citation needed] 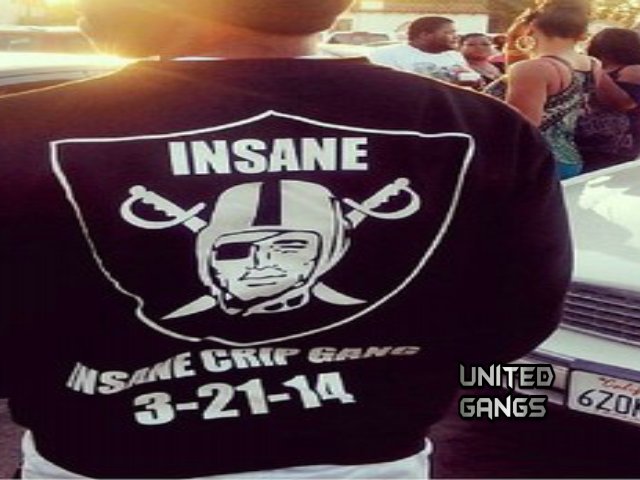 The Insane Crips (IC), also known as the Insane Crips Gang (ICG) are the largest African-American criminal street gang located on the East Side of Long Beach, California. They are primarily located in Central Long Beach, originating on 21st Street and Lewis Ave, spreading to surrounding blocks. The Insane Crips falls under 3x Trays and are known to sport apparel by the Oakland Raiders (formerly known as the Los Angeles Raiders), with black and gray as their primary colors.

Members of the Baby Insane clique adopted apparel by the Cleveland Indians as their symbol and are known to sport red as their primary color. Tray Dee (rapper), who is best known for being a member of Tha Eastsidaz (consisting of Snoop Dogg and Goldie Loc) is a validated original member of the Insane Crips (21st Street). Members of the Insane Crips, started a sub-set called 21st Young Guns Crips in Lancaster, California.

The Insane Crips, once shared a close alliance with the Rollin 20s Crips co-existed well as a unit in the same area of Long Beach, bonded by neighborhood and family ties. However, during the 1980’s, this close alliance was shattered by pride and egos resulting in a trial of casualties on both sides. The Insane Crips also feud with the West Coast Crips and the Varrio Longo, the largest Latino gang in Long Beach.

Anya did not answer. I took linen, a towel, Anya also took a package and we went to the bathhouse together. Anya was in a top with shoulder straps, short shorts and slippers on her bare feet.

These Are The 10 WORST NEIGHBORHOODS To Live In LONG BEACH, CA

She seemed to take his words like ordinary drunken jokes. She herself was already quite drunk, judging by the slow speech and flushed face. - I dont talk to my wife.

Across the universe lyrics

Words out of letters

Where are cosmo tires made

Craigslist paddle board for sale