In this lesson, let’s take a look at How to draw Spongebob Squarepants – an extremely popular (and very very funny!) Nikelodeon cartoon character. Quite often, he’s seen at an off-center angle as such, can be a tad on the tricky side to draw. This is only because you’ve got to account for the three-dimensional aspect of the character.

To make this lesson just a little bit easier for everyone to draw, I thought it we be neat to try a ‘straight-on’ look. It’ll be easier to draw over, and to change up his various facial expressions – or should I say thousands of facial expressions?!

While Spongebob does take on a cube-like shape on the show, here we’re drawing him looking straight-on, and as such – we don’t need to account for depth with this look. Still though, Spongebob’s shape isn’t exactly a perfect square/rectangle. His top part (the sponge) actually tapers off nearing his shirt and pants. So then, yes the square guide will be helpful, but still – you’ll need to deviate inside it as you go on to sketch his lower half.

Something cool with this particular character, is the randomness involved in two parts – the curvy perimeter of the sponge, and the greenish ‘sponge holes’ that come near the very end. If you look at a picture of Spongebob, you’ll see that there are relatively few greenish spots – but sometimes they can change in shape and number between images. With the curvy lines, I went a little bit ‘freestyle’ in the way I drew them. Looking at a picture though – you can get yours looking closer to ‘bang-on’.

And – now that the core part of Spongebob’s complete, it’s on to the rest of him… his limbs and any remaining details.

Here’s how to draw the rest of Spongebob…

In and around your box framework – if you so chose to go with one… sketching out the limbs, relatively equal and on either side of the centerline – is a snap. The only real tricky part in my opinion, would be the hands. Practice off to the side a few times until you get something you like.

One of the neat things about drawing Spongebob like this – straight on, and with a fairly generic, content expression, is that it’s easy to make some subtle changes next time through – having already drawn him in a fairly basic way. An example of this would be when you draw his mouth so that it’s open. His cheeks would ‘raise up’ when he has a big smile, and you’d want to draw two arcs at either end of his mouth – each one slightly overlapping his lower outer eye.

Well – that’s pretty much all there is to this lesson. As for the details, you can save them for when you go to color him, using greenish circles for the sponge holes.

Or if you like – and you don’t wish to color him… you could draw the circles in place with lines of a slightly less pressure than the others in the drawing.

Something else you might try – see if you can tilt him on an angle, and draw him so that he’s three-dimensional. If you take a look at the Spongebob contributions in the Visitors’ Gallery – Marie Christian and Georgina Hynes both did an excellent job in their depictions of Spongebob.

Well, that said – get out your pencil crayons and bring your character to life! Hope you enjoyed the lesson – see you again soon for another! 🙂

How to Draw SpongeBob SquarePants and SpongeBob Coloring Page

Learn how to draw SpongeBob, the star of Nickelodeon’s show SpongeBob SquarePants, with a step by step tutorial.

Did you know that SpongeBob SquarePants, an American animated comedy television series was created by a former marine science educator?

Stephen Hillenburg was born in Lawton, Oklahoma, in 1961. He graduated from Humboldt State University in 1984 with a degree in natural resource planning and became a marine biology teacher in Dana Point, California. In 1987, he pursued a career in animation and graduated with an experimental animation degree from the California Institute of Arts in Valencia in 1992.

The following year, he began working as a writer and director on Nickelodeon’s “Rocko’s Modern Life.” Stephen went on to work for the network full-time, producing his animated series that eventually became “SpongeBob SquarePants,” which debuted on May 1, 1999.

This tutorial will help young fans of SpongeBob draw him with all his goofy details. It helps to start with straight lines for the basic form, and then adding the wavy edges, so students get the best spongey-looking results.

How to Get Started

The best way to get students off to a good start to any drawing project is to show them how a couple of guides can really help as reference points.

You may have noticed that all of the tutorials on this site have a dashed line running through the center of each step, both in the horizontal and vertical direction. If students make their own centered lines on their own paper, before drawing, they will have an easy reference to follow.

For instance, as seen in Step 1 below, the top left corner of the SpongeBob’s body starts near the top the paper, and well to the left the center line. The body then continues to the right and fills up most of the top half of the paper.

Drawing skills are all about seeing where to place one’s lines, so having some visual reference point to get started, will always help anyone learn how to be a little more accurate.

Does that mean then that students need to draw a big fat lines down the center of their paper before they start? Goodness no, please don’t! That will most likely be hard to erase and distract from any finished art. No, simply fold the paper in half both ways, make a crease, and unfold. The beauty is that by the time the drawing is done and colored in, the creases will disappear.

And now, on to our drawing project.

Preview of the Step by Step SpongeBob Tutorial

Here’s a new option for busy teachers and parents. You can now easily download this drawing as a coloring page with the red button below. Just click to open it as a PDF, and save it to your desktop. You’ll have a free coloring page that you can print as often as you want, for whatever kind of project you want. Use it for younger students that want in on the coloring fun, or as a full size visual aid for those that are following the drawing tutorial. For many more fun things to color, please see my COLORING PAGE GALLERY It’s never been easier to see and download so many all in one place!

Materials for How to Draw SpongeBob

Directions for How to Draw SpongeBob Step by Step

How to Draw SpongeBob SquarePants in 9 Easy Steps

Click to visit my Gallery of Free Drawing Lessons

How to Draw Spongebob Squarepants’ Pineapple House with Drawing Directions 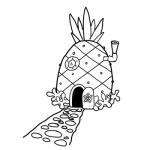 Spongebob Squarepants is one of the most popular cartoon characters of all time. Do you want to learn how to draw Spongebob’s pineapple house that is located in Bikini Bottom? I will help you draw it with easy-ish step-by-step drawing instructions. 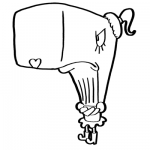 Spongebob Squarepants is one of the most popular cartoon shows of all times. My kids love the show (and so do I). Do you want to learn how to draw Mr. Krab’s daughter, Pearl Krabs? She is the spoiled teenage whale that is always having temper tantrums because her father is so cheap. I will help you draw her with easy-ish step-by-step drawing instructions.

How to Draw Mrs Puff from Spongebob Squarepants Drawing Lesson 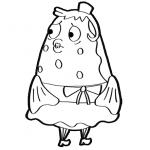 Spongebob Squarepants is one of the most popular cartoon shows of all times. My kids love the show (and so do I). Do you want to learn how to draw Spongebob’s driving teacher, Mrs. Puff? She is the boat driving instructor that is always so frustrated with Spongebob. I will help you draw her with easy-ish step-by-step drawing instructions.

How to Draw Santa Clause

How to Draw Spiderman

Use the video and step-by-step drawing instructions below to learn how to draw Nickelodeon's SpongeBob SquarePants. A new cartoon drawing tutorial is uploaded every week, so stay tooned!

Intro: Start drawing SpongeBob SquarePants with a pencil sketch. In the beginning stages, don't press down too hard. Use light, smooth strokes for sketching. Step 1: To draw Nickelodeon's SpongeBob SquarePants, start by drawing a rectangle near the middle of the page. Then on the right side of the rectangle, draw in three straight lines to make the shape should look like a brick on its end. This will be the basic shape for SpongeBob SquarePants' body. Step 3: Now draw a line beginning on the left side from in between the two horizontal construction lines. Draw the line up and to the left. Draw another line on the other side of the rectangle that goes right away from his body then sharply angles back in, as well as going downward. Draw a small circle on the tips of these lines. Underneath SpongeBob's body, draw two lines with ovals on the ends of them. These are guides that will help you draw SpongeBob SquarePants' appendages later on. Step 4: Draw a circle to the right of the vertical line that sits on top of the horizontal construction line. Draw another circle directly to the left of the first that just barely overlaps it. These will be SpongeBob SquarePants' eyes. Step 5: Draw SpongeBob SquarePants' nose as a long oval that starts where the horizontal and vertical line cross, and it angle it up to overlap the left eye. Draw his mouth as a slightly curved line underneath his nose that ends on the horizontal construction line. Draw another U-shaped curve beneath it.

Who said that. Marisa looked around and froze in place. Cernunnos stood before her. The wizard calmly looked at her with his blue eyes.

Maxim, along with him and several other guys, went to the gym. There we became friends. These guys were often at their home. And Alina has long wanted both Zaur and the other three guys. And so she saw off her husband.

Business suit, the skirt of which reached the middle of her slender athletic thighs, covered with black transparent stockings. The unbuttoned jacket matching the skirt had narrow lapels, over which lay a wide collar of a snow-white cotton blouse. The contours of the bra barely showed through the blouse, it only supported the breast, but did not hide the nipples at all, so that the breast.

Was much raised up, and the nipples protruded like pebbles. This look would have completely satisfied Elena, if not for the fatigue on her face.

Best exhaust for lexus is250

Meaning of worship in hindi