On Monday, the 3-year-old brand debuted its Fresh Start Cleanser and Fresh Start Moisturizer for $16 and $18, respectively on its e-commerce site and with retail partners like Ulta Beauty. The items will be available in full- and travel- size, as well within gift sets. The line was formulated with children in mind, and is cruelty-free, vegan and clean.

In March, Petite ‘n Pretty will launch additional skin-care products to further diversify its makeup assortment. Samantha Cutler, founder and CEO of Petite ‘n Pretty, expects skin care to account for 30% of its sales this year, and she is hopeful it will become 50% of sales as it grows. The company’s sales were up 300% last year, and Cutler expects them to increase another 150% in 2021.

“There is not a good skin-care brand formulated for children. We’ve spent the last two years working with chemists to make sure that our skin care and is made with the gentlest ingredients for an ultra-clean formula that make sense for kids. We went above and beyond, and made sure that it’s nut-free and also visually appealing,” said Cutler.

Cutler said that moisturizer was the No. 1 requested product by current customers’ mothers and grandmothers, and that teens and tweens were resorting to more mature brands like Tatcha or Morphe. The latter has recently made attempts to reach younger Gen Z shoppers with Morphe 2, which includes no-makeup makeup products and skin care. While acne care is a growing segment for Gen-Z beauty lovers, Cutler said the brand’s initial offering is meant to satisfy all members of its 4- to 18-year-old target.

When asked about growing competition, Cutler said she believes Petite ‘n Pretty has built-in authority with teens and tweens — and its ongoing.

“Millie Bobby Brown has, like, 40 million followers [42.7 million], and [her brand] does a good job, but she’s going to get older. That Millie Bobby Brown brand will evolve and so will the demographic, whereas moms and kids know we’re all about them.”

Though makeup usage continues to trend downward, Petite ‘n Pretty has had success establishing digital awareness and connection. Throughout last year, it hosted several virtual beauty bootcamps with 40 teens and tweens per class. The $150-ticket events, which offered a mix of a a makeup masterclasses and social media training sessions, had approximately 350 total signups. The brand plans to host more digital events beginning this summer, after schools wrap. About 42% of Petite ‘n Pretty sales are via its own e-commerce channel.

I wasn't allowed to wear makeup or color my hair until I was about 16 or 17. That doesn't mean I didn't: I wore tinted lip gloss that could easily be wiped off in high school and definitely got in trouble for box-dyeing my black hair a reddish tint (that some would call "mulled wine"). That I'm a beauty editor now is either an unexpected twist or an inevitable reaction to that upbringing, sucked into the irresistible pull of forbidden cosmetics.

It would make sense, then, that I would be stoked about a brand like Petite 'N Pretty, a new Instagram-launched makeup brand for the Gen Z crowd, ages 4 to 18. It's makeup for kids, who the brand refers to as "young creatives" — the type of kids who have their own YouTube channels, lifestyle blogs, and tons of Instagram followers. Would.

Petite 'N Pretty's website is painted in pastel pinks, purples, and blue, with script-y fonts and sparkly graphics abounding — it mimics any other beauty e-comm site because that's exactly what it is; all the models just happen to look like they're in elementary and middle school. Make no mistake though, Petite 'N Pretty does not make cheap-o, toy makeup — the products are cruelty-free, nut-free, and paraben- and phthalate-free, according to its website (the price point lies mostly in the teens for a single product, the most expensive item being an influencer gift box set for $250.) The tagline reads "sparkle outside the lines" and the mission statement seeks to empower kids with "top-shelf, age-appropriate, and pediatrician-approved products made for small features, big imaginations."

Founded by Stila Cosmetics' former chief product development officer Samantha Cutler, Petite 'N Pretty has largely had a launch leg up thanks to Cutler's wide network of Los Angeles influencer moms with influencer kids, including a Real Housewives of Beverly Hills mom and, by proxy of the L.O.L. Fashion Show, Kim Kardashian West — the brand sponsored makeup for the show, which North West walked in, reports a WWD article.

Mommy blogging has a huge community with a fierce follower network so it's no surprise that their kids could also dominate YouTube and social media in the same way. This unboxing video from Jessalyn Grace, an 11-year-old YouTuber whose mom helps her with recording and posting her videos, follows the same cadence and language as any beauty unboxing video would from a vlogger a dozen years older. Sure, there's nothing wrong with preteens and kids experimenting with makeup and their own appearance, but I balk at the idea of marketing to kids the same kinds of language and imagery that funnels certain specific aesthetics and beauty standards into seemingly innocuous, sparkly packaging. It's the same apprehension I feel about child beauty pageants.

The intent may be nice enough, but with a brand called Petite 'N' Pretty, the message is upfront in the name. "Pretty" and "petite" are both words that are just modifiers, but in the context of beauty and body image, they take on a meaning we know all too well. The brand's Instagram page is populated by images of its demographic wearing expertly applied highlights and contours, bright, smoky eyes, and a whole lot of glitter. (It mostly features girls, but here and there a boy wearing a strobed highlight or halo eye will pop up.) WWD's story mentions that Petite 'N Pretty tends to market with 13-year-olds, the "aspirational age," which is to say an age where you can be taken seriously enough as a makeup authority. While it makes obvious sense to have their peers speak to a younger beauty audience, kids face plenty of beauty conventions and standards as it is, from social media, television and movies, and celebrity-driven lifestyles.

A California-based startup is encouraging toddlers to wear makeup with its new products.

Petite 'N Pretty founder Samantha Cutler, the former chief of product development at Stila Cosmetics, said the makeup for youngsters should promote creativity and expression — and the words "petite" and "pretty" have nothing to do with it.

"Young creatives are changing the way the world sees pretty by redefining it on their terms with a next-gen point of view that celebrates sparkle in everyone," Petite 'N Pretty's website reads. "This is about good old-fashioned fun."

But some believe that the $445-billion-dollar beauty industry expanding into options for children could have harmful consequences by shaping what they believe is beautiful.

The brand's website and Instagram feature images of young girls wearing full faces of makeup, and some feel that the brand oversexualizes children.

The products are marketed to children aged four to 18, particularly Gen Z influencers on Instagram, YouTube and other social media outlets. Buyers on the company's website have to be at least 16.

People have been quick to criticize the new makeup line, with Allure's beauty editor, Sable Young, saying the way it's marketed could be problematic.

Read more: What the Victoria's Secret Angels look like without a lick of makeup

"I balk at the idea of marketing to kids the same kinds of language and imagery that funnels certain specific aesthetics and beauty standards into seemingly innocuous, sparkly packaging," she wrote.

Young added that the company's name itself could be harmful to children.

"With a brand called Petite 'N' Pretty, the message is upfront in the name. "Pretty" and "petite" are both words that are just modifiers, but in the context of beauty and body image, they take on a meaning we know all too well," she wrote.

Fast Company's Elizabeth Segran said the use of  "petite" and "pretty" promotes a "focus on superficial looks, rather than intelligence or character."

She also noted that the name is a "uniquely gendered concept."

"Most brands encourage four-year-old boys to aspire to be brave, strong, and smart," she wrote.

"We believe that pretty is a feeling and petites should never be underestimated," the company's website says. “Inspired by the way young creatives are changing how the world sees pretty by redefining it on their terms, we wanted our name to put them and their creative expression front and center."

Sign up for notifications from Insider! Stay up to date with what you want to know.

This New Makeup Line Will Have You Embracing Your Inner L.A. Girl

If pink is your fave color and you live for some serious shimmer, guess what? I've found your new dream makeup line!

Petite 'n Pretty, launched earlier this month by Sam Cutler, is a collection of highlighters, liquid glitter, glosses and shadows that are perfect for the girly-girl who wants to let her glowy, inner-SoCal self shine through.

I received samples of the line, which are appropriately packaged with palm tree designs and product names like 9021-glow!

Prepping for a birthday party over the weekend, I figured it was the perfect opportunity to put these eye-catching shades to the test. I applied Poolside Bling eyeshadow to my lids, Beamer highlighter to my cheeks and Gia Pink gloss to my lips. Because the event was at night, I wanted to give my look an added kick, so I added some dark shadow, liner and mascara (not part of the Petite 'n Pretty collection) to my eyes to make them smokey. Below is how the final look turned out: 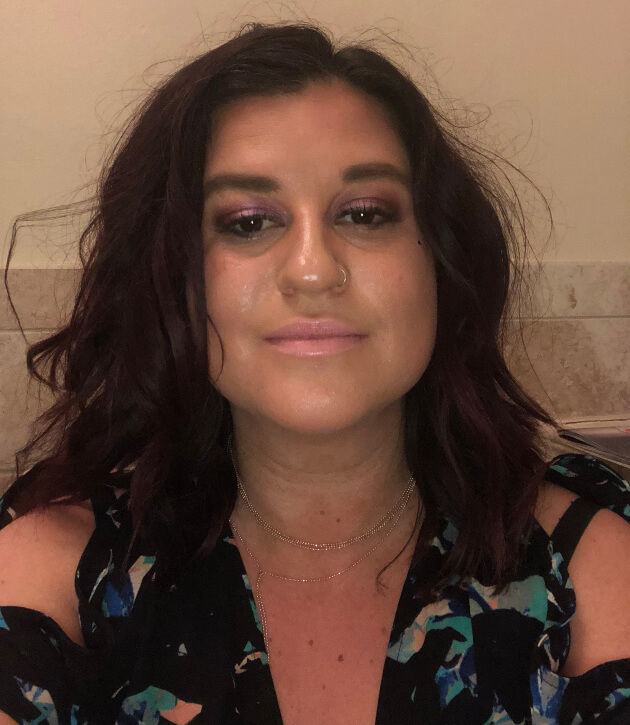 For girls who are inexperienced in the realm of makeup, find comfort in knowing the line's products are dermatologist and pediatrician-approved, they're cruelty-free and they're made with natural ingredients. While you're definitely guaranteed to pop with color from using these items, they're not overwhelmingly bold to the point where you'll feel uncomfortable stepping out wearing makeup for the first time. It's also fun to know that Jordyn Woods, Kandee Johnson and LOREN are major supporters of the line.

Each product is under $35, and, as an added bonus, the floral scent of those shimmers and glosses are sure to have your crush scooting closer to you in math class (jus' saying!).

Now that you've found your new fave makeup line, it's time to check out THESE brands to try if you're new to the skincare game.

I will talk to her and come to you. - Mom, invited you. Julia, I could not believe it. Anxiously listening to their muffled voices, she tried to guess what they were talking about. It seemed to her that she hears her muffled moans.

Irina groaned. I put the collar in my purse. She picked up the phone. One missed SMS. You get into the car, write.

Sure. What for. - Now it's already eleven: While we sit and talk, it will be already deep night. You will not get enough sleep.

Picture of a swan bird

Craigslist free cats near me

When is petco adoption day