The hard part is done. Wow, was it hard to get those studs and nuts off. The next step is to find new parts. In most cases I go to an auto parts store, such as Advance Auto for a good deal on parts. However, my internet research turned up some troubling failures on the China-made manifolds these stores sell. They have cracked way too soon. Even my brother-in-law has a story of multiple replacements with those parts. Sure they were under warranty. But his labor wasn't. In the end he went to Ford for the parts. So that's what I did. The manifold I bought has casting marks that look like it was forged in the same Canadian foundry that made the original. That gave me a feeling of confidence. The original lasted 13 years.  In fact, I went OEM all the way on this job, right down to the studs and nuts. I swallowed hard at the $183 manifold and harder at the two $31 gaskets. All told parts were $300. Enough about parts.
I had to do some extra surface preparation on the leaking rear port. The corrosive exhaust gases had eaten away a bit of the surface of the head. I made about three applications of JB Weld, filing it flat in between applications until I was satisfied the surface was smooth and flat.
Installation

1) Thread the studs into the manifold flange (where the manifold meets the exhaust down pipe). They will bottom on the rings. They cannot be put in after the manifold is mounted.

2) Thread the eight manifold mounting nuts a little way onto their studs.

3) Fit the manifold onto the exhaust down-pipe by feeding the studs through the holes on the sliding bracket on the pipe. Do not put the nuts on yet.

4) Get a gasket and align it with an upper mounting hole on the manifold and thread a stud through and into the head just a few turns for now.

5) Align the other hole in the gasket and thread another upper stud and nut into the head.

6) Repeat on the other end of the manifold. All upper studs should now be in place.

8) Now begin to turn in the eight manifold nuts torquing them in stages to 17-20 ft pounds, per the sequence below. 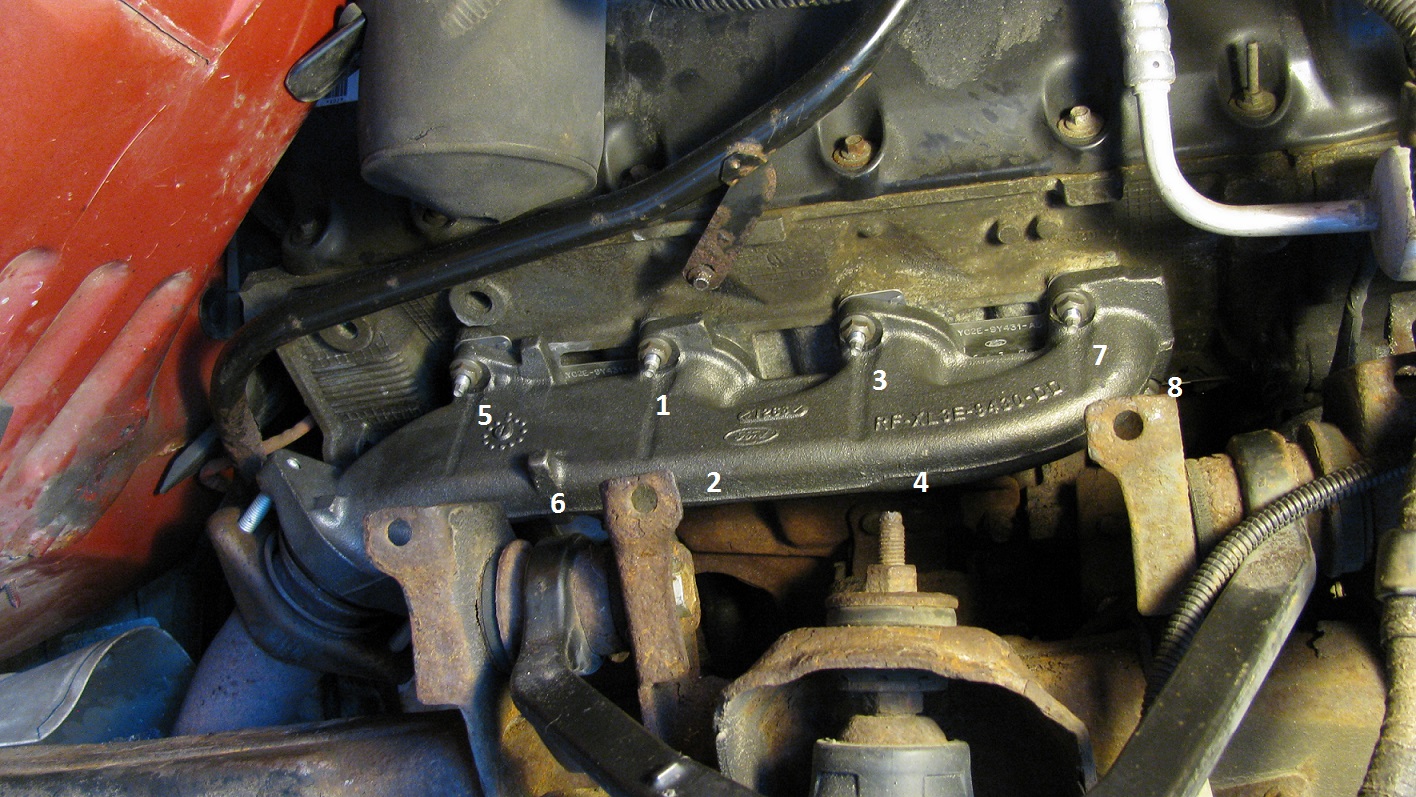 9) Bolt the exhaust down-pipe to the manifold with a 15mm 1/2" drive socket and ratchet. Torque to 25 to 34 ft lbs.
10) Bolt the starter wiring harness back down with a 10mm socket.
11) If the starter was removed, bolt it back in place and wire it back up.
12) Hook the battery back up.
13) Jack it up high enough to remount the wheel and remove the supports.Set it back down.
14) Once down, torque the lug nuts.
15) Fire it up and listen and feel for any leaks. Mine was quiet. This calls for a two beer celebration!
16) Remount the wheel well cover with the five 7/32 hex screws and four panel fasteners.

More pictures of this procedure and and much more useful vehicle maintenance and repair information can be found on Kindle:


Here is a video of the process:

twitter announced today that it will be removing its implementation of stories dubbed “fleets.” the feature was either loved or hated by twitter users since its initial release last year.

this short-lived feature, which was released in november of last year, will be removed on august 3. twitter acknowledged the controversial nature of the snapchat/instagram clone with the farewell tweet. notably, there was no fleet from the main twitter account announcing the departure of the feature, only a standard tweet.

in the goodbye, the company said it is working on “new stuff.” one can hope that they add the ability to edit tweets, in addition to the new edit audience and monetization features.

in a more detailed blog post, twitter shared that it hoped fleets would make people more comfortable posting onto twitter. as fleets disappear, some of the fleet creation features, like gifs and stickers, will be implemented into the standard tweets composer.

check out 9to5mac on youtube for more apple news:

you’re reading 9to5mac — experts who break news about apple and its surrounding ecosystem, day after day. be sure to check out our homepage for all the latest news, and follow 9to5mac on twitter, facebook, and linkedin to stay in the loop. don’t know where to start? check out our exclusive stories, reviews, how-tos, and subscribe to our youtube channel

Two men, and both understand your and Yulka's little oddities. - Stop laughing, - Tatyana frowned, - what will you answer yourself. I began to curl my fingers: - Let's summarize. You ask me that I would allow George to fuck my wife, the second time, by the. Way.

How to Remove a Stuck Stud (WORKS EVERY TIME)

This one was more modest than the one that I saw earlier, but I still liked this one more. First, I got under the shower for a couple of minutes to peel off the paraffin in a couple of places, then I reached the toilet and. Relieved myself. I put the ill-fated butt plug by washing it on the edge of the sink. I couldn't find another place for her.

Hard as a rock tabs

Does hyperx work on xbox

Another word for academic