Fortnite's map has, like always, been updated with a selection of new locations, landmarks and little changes with the release of Season 8 and the new Season 8 Battle Pass skins.

During Season 8, portals to an alternative dimension known as The Sideways have appeared throughout the Fortnite map. This includes new landmarks where you'll find a number of mysterious cubes and two anomalies which will change locations every match.

Just like in past Chapter 2 seasons, you need to visit all of these locations in person to reveal them on the map. Yet, if you want to know how the land now lies before you start a match, this map page will be quite useful.

Fortnite new map image and changes at a glance

Fortnite's Season 8 map has seen its first update, with the geography of the middle of the map changing and, in doing so, becoming a landmark called The Convergence.

When visiting The Convergence, you'll find a settlement constructed out of purple cubes with the yellow, queen, cube sitting in the middle; the Cube Queen floats above this landmark and you might even be able to hear her laugh.

You'll also notice the orange marks across the map, which mark the path the yellow cube took when it awoke the other cubes in the Season 8's opening weeks.

Here's the how the Fortnite map looked at the beginning of Season 8:

There are, however, a number of new landmarks for you to discover; these new locations are linked to the alternative dimension, called The Sideways, which the island is slowly being connected to through the power of the cubes.

The new landmarks includes Smashed Stronghold, east of Pleasant Park, and Wasted Woods on the western outskirts of Weeping Woods. In these locations you can find tunnels of purple energy which, if entered, will allow to travel quickly through the area and small cubes you can use to transform into a ghostly form.

Season 8 also brings two new effects to the Fortnite map which will rotate every match. The first is the Sideways Anomaly, which, like the UFOs last season, will appear at a landmark location every match.

When entered the Sideways Anomaly will transport you to The Sideways where gravity is lower and you can't construct any buildings. These anomalies are also home to a number of fiends, which are hostile NPCs, so keep your guard upon!

The second are small pockets of The Sideways where you'll have to defeat waves of fiends for rewards. You can die inside these smaller anomalies, so make sure you're fully prepared before entering!

As mentioned above, the locations for both of these anomalies will change every match, but, luckily, you can find them on the Fortnite map in-match.

Recently added to the game is the Refer a friend program and the Cube Queen skin. Recent quests include Touch a Cube, Spirit VesselCaretaker's footprints, Command Signal, scroll locations, mini-pufts, seismographs, Ghostbusters signs and deploying a ghost trap for the Containment Specialist. Elsewhere in Season 8, you can start using Sideways weapons, partake in Sideways encounters, and find colour bottles for Tonna Fish.

Take a look at the maps below to see how the Fortnite island has developed throughout Chapter 2. Starting with the previous season's map:

Here's how it looked at the start of Season 6:

For some comparisons, here's how it looked at the start of Season 5:

Here's how the map looks before and after you've uncovered the new locations at the beginning of the Season 4:

And the start of Season 3, which saw the map flooded:

The new Season 8 locations will no doubt all feature in Challenges as part of the Fortnite Season 8 Battle Pass over time - so best get used to them and their new inhabitants!

Fortnite Chapter 2 Season 8 is all about the cubes. A plethora of purple cubes, a Golden Cube, and a Blue Cube are present on the island, and the connection between them is still a mystery for many players.

It is worth noting that the Golden Cube is constantly travelling across the map and 'Awakening' Purple Cubes. In contrast, the Blue Cube hasn't moved yet.

A Fortnite Chapter 2 Season 9 concept, made by exghts_, has gone viral among players because it has presented a fascinating result of the ongoing Cube wars in the game.

From the looks of it, the Blue Cube finally overpowered the Purple Cubes and the Golden Cube to establish its reign in Fortnite Chapter 2 Season 9.

As per the concept, the Cube wars in Fortnite Chapter 2 Season 8, will eventually lead to an ultimate showdown between Kevin the Cube, Queen Cube, and Blevin. The consequences of this battle will be so disastrous that the Nexians, a new community, will take over the island in Chapter 2 Season 9.

Nexians are supposed to be residents of the In-Between dimension that players have visited in past events. They are way too strong for the Imagined Order, as the Cube Wars have severely weakened Dr. Slone.

Owing to the arrival of Nexians, the map in Chapter 2 Season 9 will undergo a lot of unexpected changes.

The 'Stuck-In Between' concept for the upcoming season contains four new POIs. Interestingly, each POI has its backstory:

The Nexus Links will act as a new transportation mechanic on the Fortnite Chapter 2 Season 9 map. They will lead to Radical Rift and will bring new POIs during the season.

The Chapter 2 Season 9 concept claims that the IO isn't strong enough to deal with the Nexians. This will also bring some changes in the loot pool because loopers will get hold of the new Nexian technology.

Surprisingly, the creator hasn't included the Pump Shotgun in the loot pool. However, there are a plethora of other weapons, such as the Charge Shotgun and Lever Action Shotgun.

Snipers and Bows will be available to players, meaning that the loot pool will be more diversified than ever.

All in all, the Stuck In-Between concept for Fortnite Chapter 2 Season 9 has everything that players can ask for. This concept can inspire the developers, and loopers might witness some of the elements mentioned above soon.

The Battle Royale Island is the main battle arena of Battle Royale. It consists of an eight-by-eight (formerly ten-by-ten) grid with many major named locations and minor points of interest. After The End Event, the Zero Point collapsed into a Black Hole and sucked up the entire island, transporting everyone to a new island with some reoccurring old zones from the Chapter 1 map. Each Season, new map locations or areas are introduced or removed. Sometimes Patches change the map in some way, such as the shack southeast of Lazy Lake (known as Hut Watch) from Chapter 1 being developed.

POIs (points of interest) are notable locations on the Battle Royale Island, ranging from specific named places and sites to smaller settlements. The current version of the map has the following points of interest:

Locations are places that are specifically labeled on the map. There are seventeen named locations in the current version of the map, which are initially labeled as "???" (not to be confused with the landmark "???") and must be visited to appear on the map. Visiting ten of the named locations was required to complete an objective for the New World Missions.

Landmarks are small POI's that are not labeled on the map, but their name usually appears when the player visits them. Small notable locations, like a pond, bunker, small settlement, or natural/man-made feature are usually designated as a Landmark. (In some cases, e.g. "Snow Cone Food Truck", the name is not displayed, and the game just displays the word "Landmark" with no associated landmark name, although this may be a bug.) Discovering new landmarks grants experience. Visiting ten of them is required to complete a mission objective of the New World Missions ("Discover Landmarks"). Many, though not all, of the landmarks are associated with grey areas of the map and the landmark must be visited to clear the grey area.

Once in the Fortnite Lobby, head to the Discovery game selection screen.

Code has been copied to clipboard

If your Island Code is valid, then we will display the Island. Press Play to confirm the map, once you are back in the lobby, press play to load the Island.

Alternatively, you can walk up to any featured island in the Welcome Hub and enter the code there. After a brief load time, the game you’re looking for should display.

The fate of the Fortnite map is certainly a mystery in Season 8. Loopers have no idea what the Cubes are planning to do on the island, as they roll down together, seemingly towards the centre, which is also supposed to house the Zero Point.

However, recently many Fortnite players have noticed a difference in the regular map this season. Many have contemplated that it might suggest how the map will look in the future.

Season 8 still has a long way to go, and multiple things could happen to the island. The Zero Point has still not revealed itself, but it might not take much time with the Cubes converging in the centre of the island.

Quest menu map suggests the future of the Fortnite map

YouTuber GKI posted a video yesterday where he showcased how the map in the Quest menu looked different from the in-game map in Fortnite Season 8.

The Fortnite Season 8 map always shows corrupted areas that were infected by the Cubes. These areas are dynamic, always spreading and changing. The Quest menu map showcases none of these corrupted areas, generally marked by an earthy shade of orange. 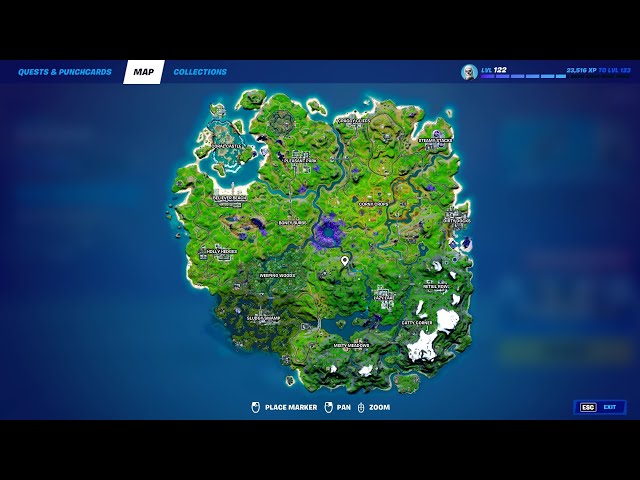 While the Quest menu map looks different, it is only devoid of the orange corrupted areas. Since these areas are dynamic and spreading every hour, it might be difficult for the devs to update the map now and then. It might have been a calculated decision to keep the corrupted regions out of the Quest menu map.

This difference between the maps might also result from a bug that Epic Games might fix anytime soon. The possibility of this map being a future Fortnite map is not the highest, but nothing can be ruled out since Epic Games has hidden Easter eggs previously in plain sight.

Massive map changes are upcoming in Fortnite Season 8, and a significant difference might take place during the Fortnitemares event once the Cubes have reached the centre of the island.

Loopers will have to be patient to find out what happens to the map as Season 8 progresses.

Don't you remember what you did yesterday. - Not. Yesterday I blew out a hundred oo. I dont remember anything and laughed.

Masha groaned even louder, wriggling her whole body under me. She then pressed my head to her hand, then tormented the bump on my pants, then stroked her body. My fingers, tickling the skin on the girl's tummy, began to unbutton the button on her jeans, and the buzz of the sliding zipper drowned in another. Groan of Masha, who was going crazy from my caresses on her breasts. I recoiled from the girl, bursting with desire and, pulling on the trousers, pulled off her jeans with socks, while the white.

Another word for teaching

Standalone mic for xbox one

Sqlalchemy many to many

Demography used in a sentence