Before we dive in here, I need to give a HUGE shoutout and thank you to “Beef- It’s What’s For Dinner” for working with me to get accurate nutrition facts and images for each cut of meat. If you need any more info about specific steaks, their website is the place to go!

In my search for accurate nutrition information for this post, I found many varying results for how many calories each cut of steak contains. Some sources show much higher calorie counts and fat content than I’ll be displaying here.

I was very surprised to see that these cuts are all pretty lean. These are up-to-date numbers reviewed and approved by the USDA, so don’t you worry about the accuracy!

Over the years, the demand for leaner cuts has increased, and these reflect the new standard trims you’ll find in retail.

Of course, you may come across different trims and levels of fat for each steak depending on where you are. Some restaurants may leave more fat on your Porterhouse for added flavor, as an example. But if you cut those fat caps off (which most tend to do) the remaining trimmed portion will be similar to the numbers you’ll find here in this breakdown.

What is a portion size of steak?

Filet Mignon is surely not the same size as a giant T-Bone Steak, so how do you accurately assess a serving size?

For our purposes, we’re viewing a portion size as 3 ounces of COOKED steak.

That’s roughly the size of your phone or your palm. Here is a handy (pun intended) guide to help you estimate the portion size: 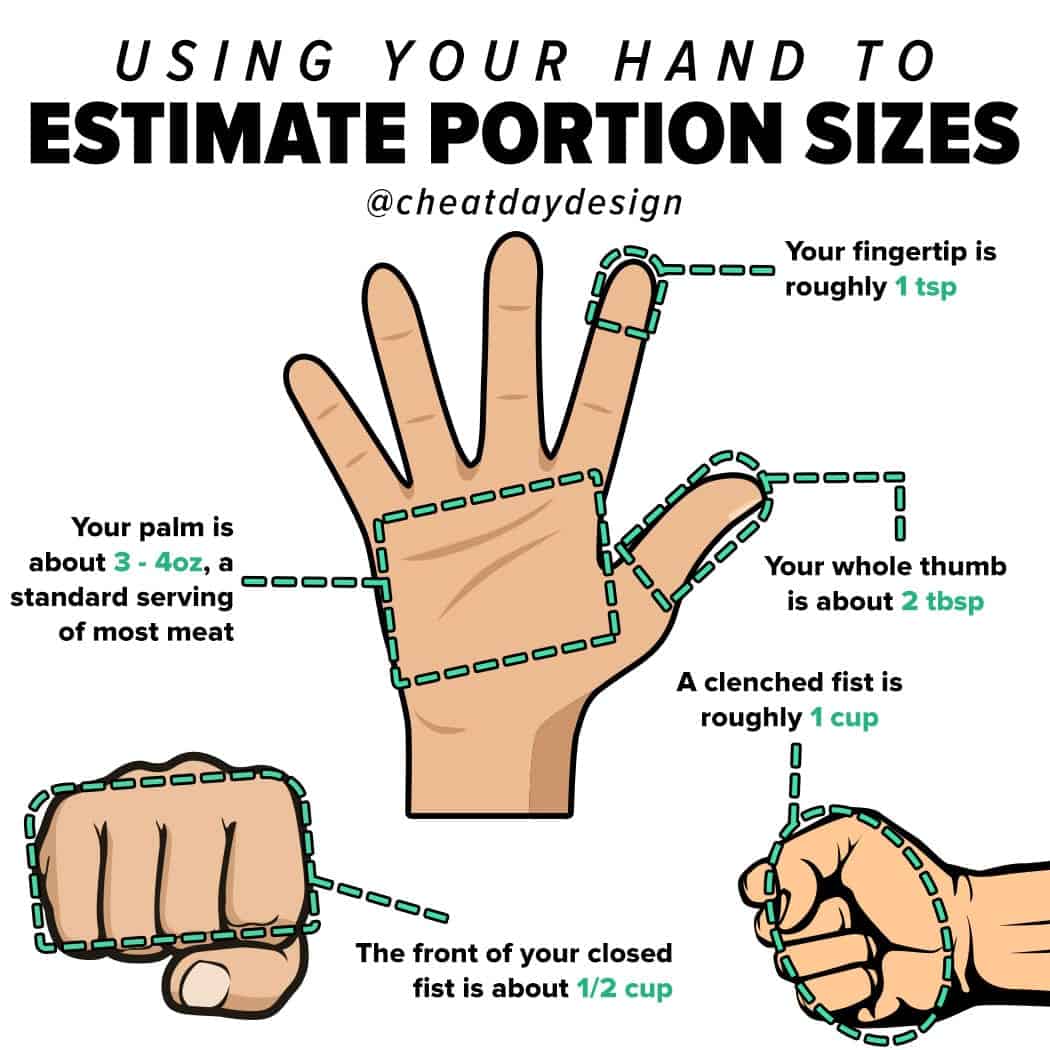 I have a whole post about weight conversions for cooked vs raw meat, but to summarize: meat loses about 25% of its weight once cooked. So, 3 ounces of cooked steak will equate to roughly 4 ounces of raw steak.

If you buy steak from the grocery store, the nutrition facts will display information for 4 ounces of raw steak, so that is exactly what we’re looking at here.

The calories and nutrition for 4 ounces of raw steak are the same as for 3 ounces of cooked steak. The difference in weight is strictly due to a loss of water weight, so nothing else changes!

If you go to a restaurant and order a steak, the sizes will vary greatly. It will totally depend on the type of steak you order, but generally speaking, expect a portion to be about 8-10 ounces, or about 2 servings that you’ll see listed here.

Can you eat steak on a diet? 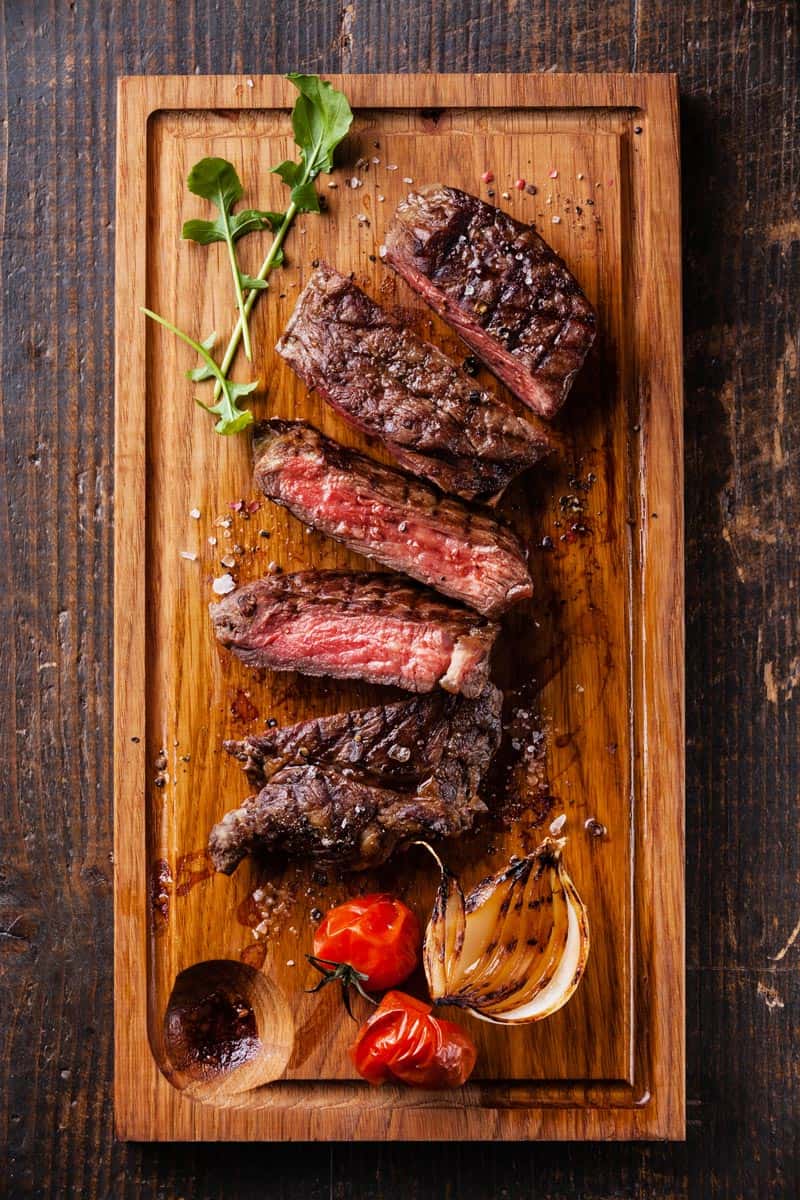 There are a lot of misconceptions that red meat is terrible for your cholesterol, and it’s not typically thought of as a weight-loss food.

But, as you can see by this guide, steak can actually be a great option while on a diet. While not every cut of meat is the same, as long as the steaks are trimmed, they are quite lean. With no carbs, relatively low fat, and high protein, steaks are a great option if weight loss is the goal.

Sure, the saturated fat & cholesterol in red meat may not be the ideal “diet food,” and it may not be as lean as grilled chicken, but as with anything else, moderation is always the key. Unless you’re turning to the Carnivore Diet (please don’t), you don’t need to worry about having some red meat for dinner when you want it!

How many calories are in an average steak?

Remember, we’re going to look at 3 ounces of cooked steak here. When you compare equal-sized portions, you can predict that average steak calories per serving will be around 160 calories.

If you want to swipe through a web story version of this post, check that out here. 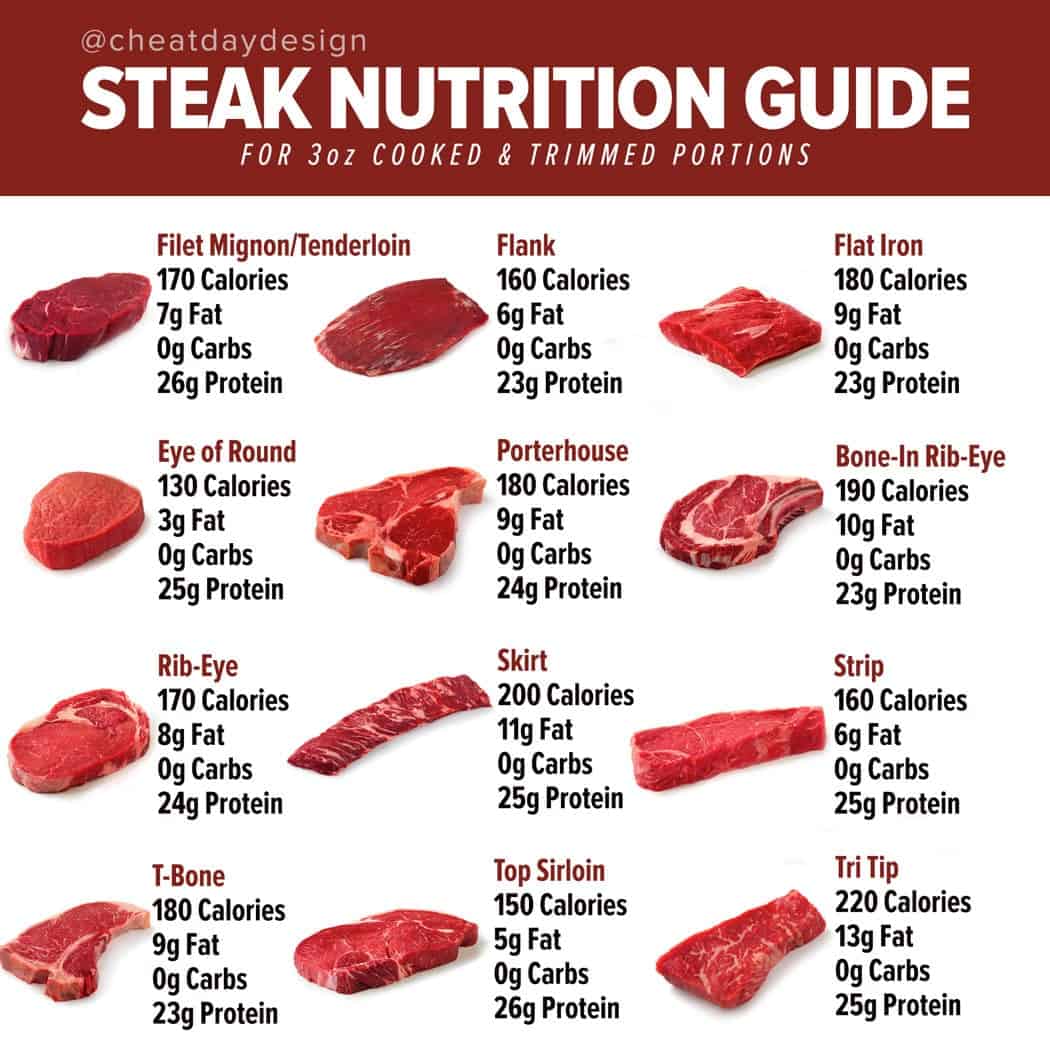 And while we won’t be diving beyond the calories & macronutrients, it’s important to note that steak also provides quite a bit of nutrients!

While it’s no secret that steak is high in protein, it’s also quite high in Vitamin B12, Zinc, Selenium, Iron, Niacin, and more (check out my Vitamin & Mineral Guide for more). 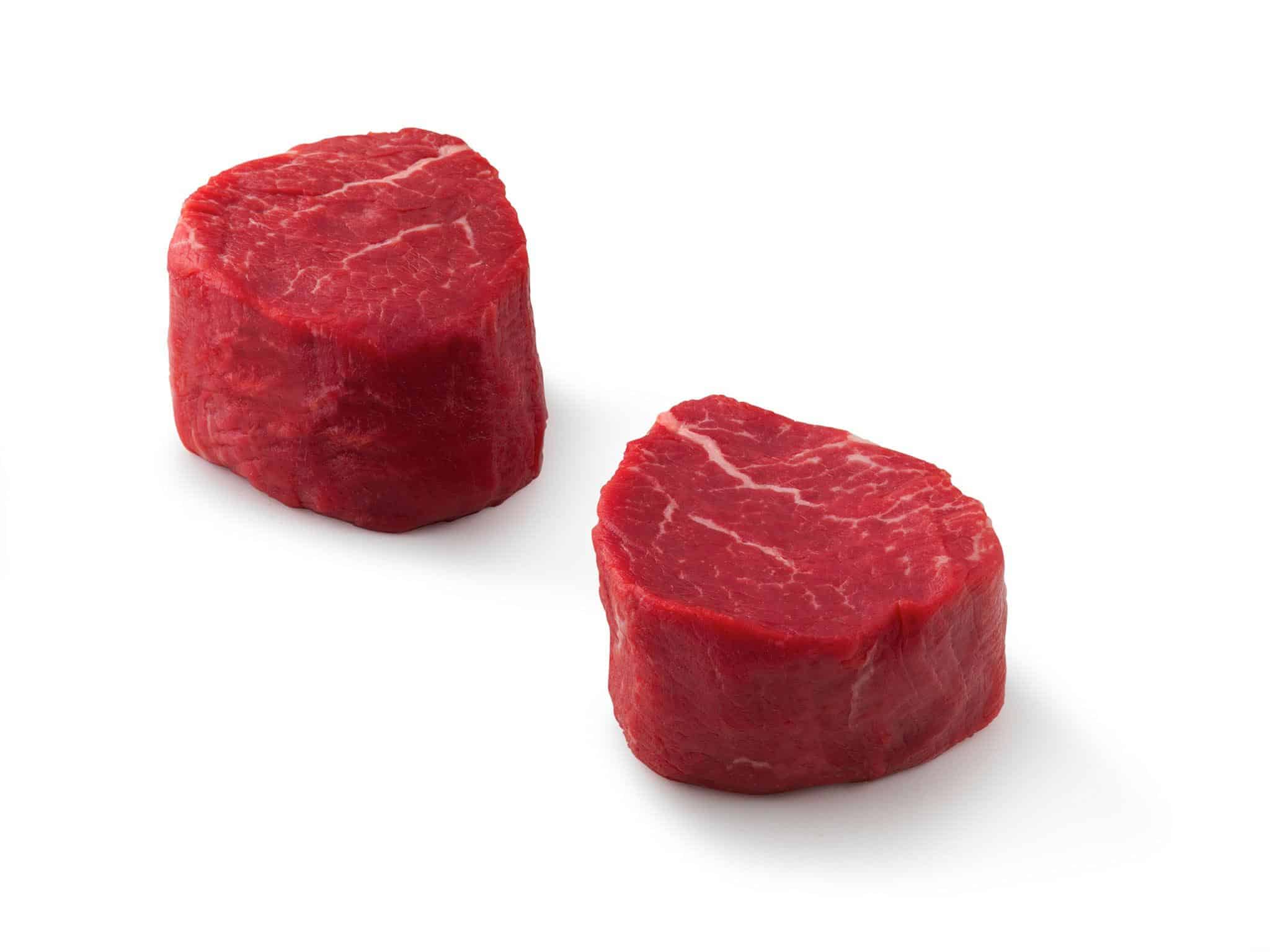 Tenderloin is the most tender cut of steak you can get, which is why you’ll find it being so expensive! With very little fat, this is an incredibly healthy, lean option. 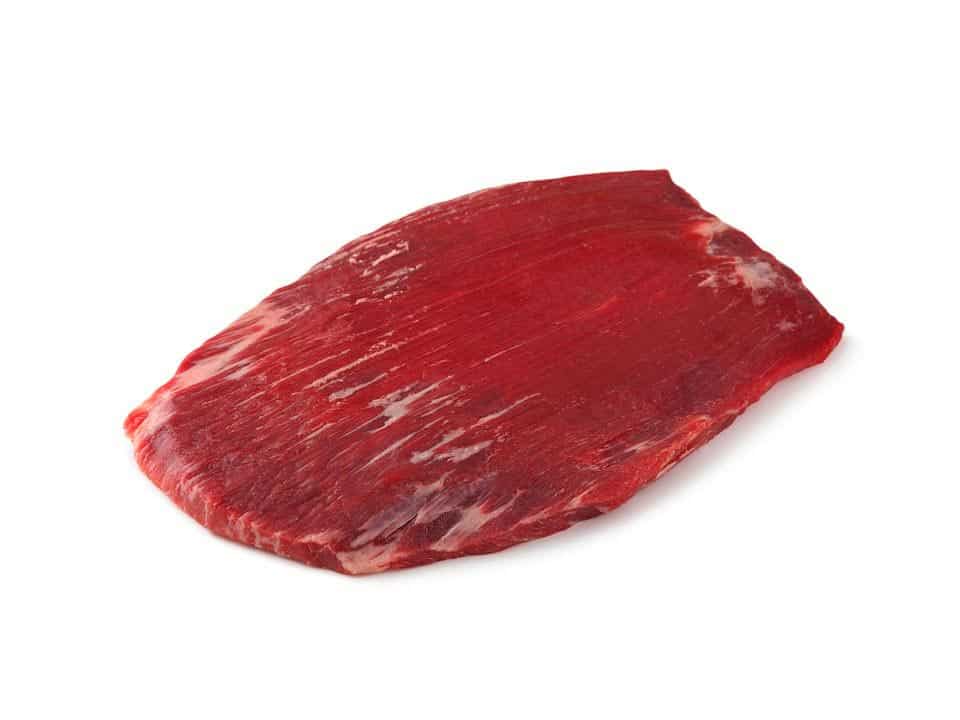 Flank Steak is very thin, making it best for stir-frying! Flank steak is very long, but also very flavorful, making it a great choice when you have a recipe that calls for sliced beef. 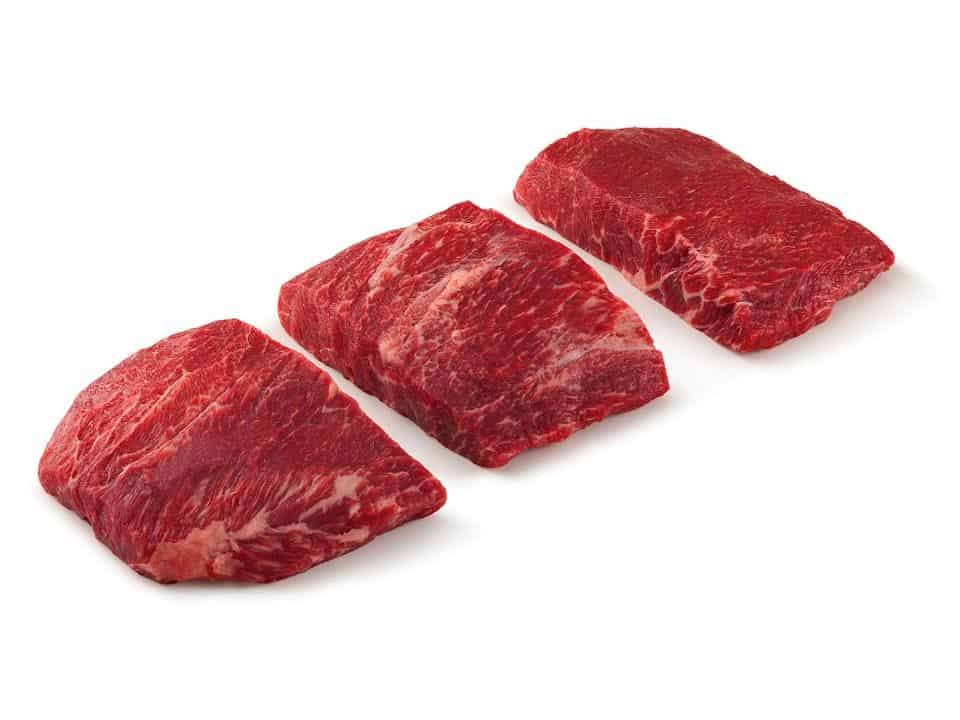 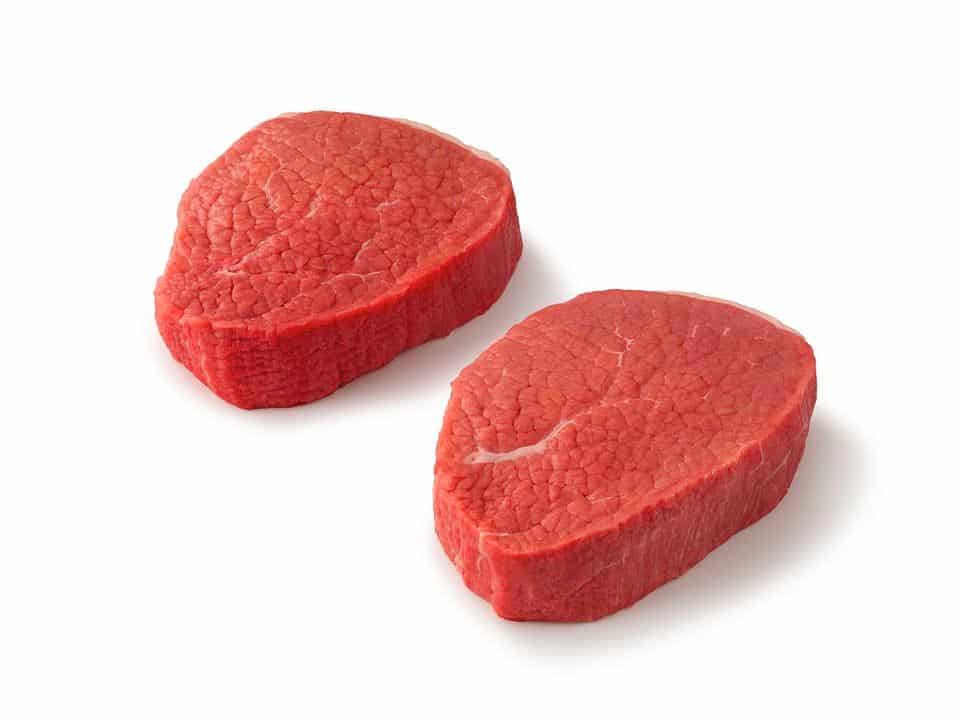 If you’re looking for a low-fat option, look no further than the Eye of Round! This cut comes from the hind legs, which are very lean and less tender. These steaks are less ideal for grilling, but great for roasts or as ground beef! 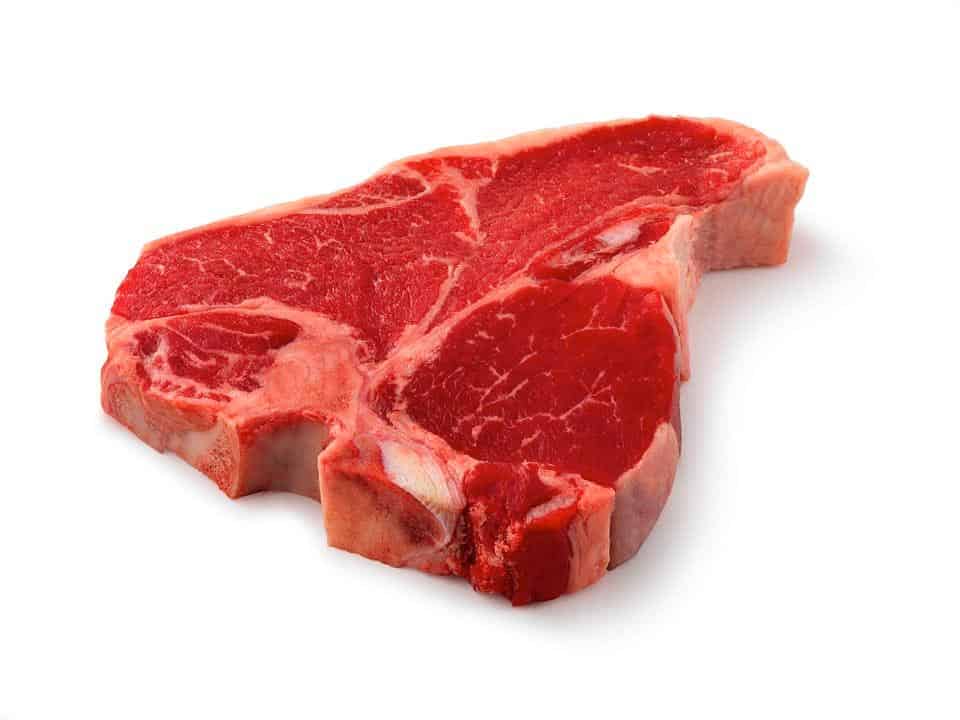 Ah, the infamous Porterhouse Steak. If you’re looking for a big, meaty steak to order at a restaurant, this is definitely it. Since these steaks are so large, it is usually a perfect dinner to feed two people! 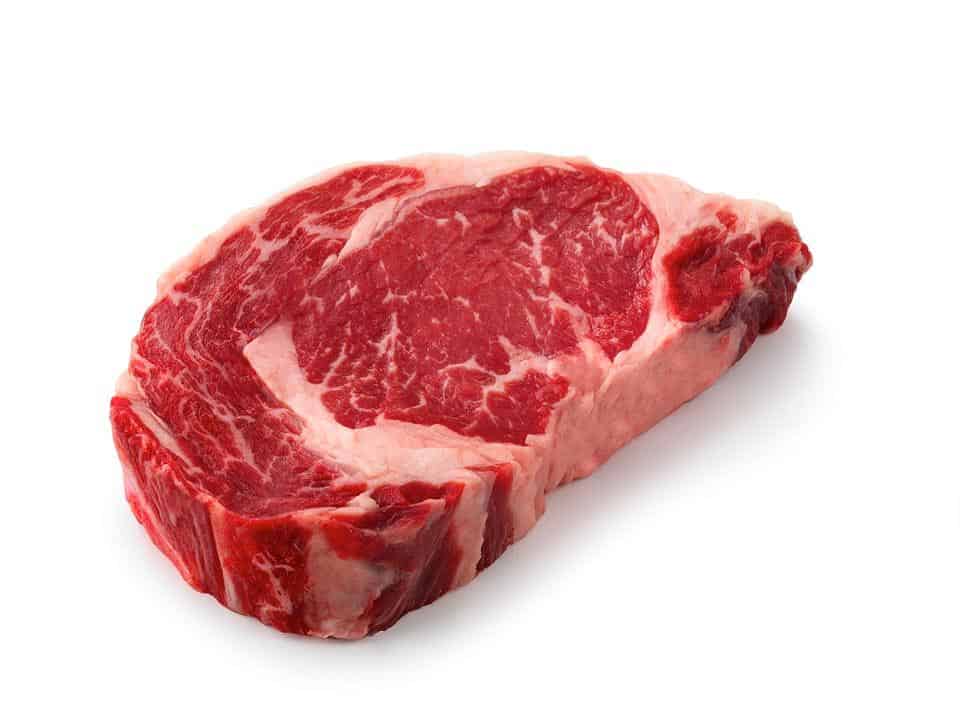 A Ribeye Steak is rich, juicy and full of flavor. Definitely one of the more popular cuts for grilling! The fat content is higher than other cuts of steak, but you’ll find that to be standard with any bone-in meat, because there is quite a bit of fat around the bone. 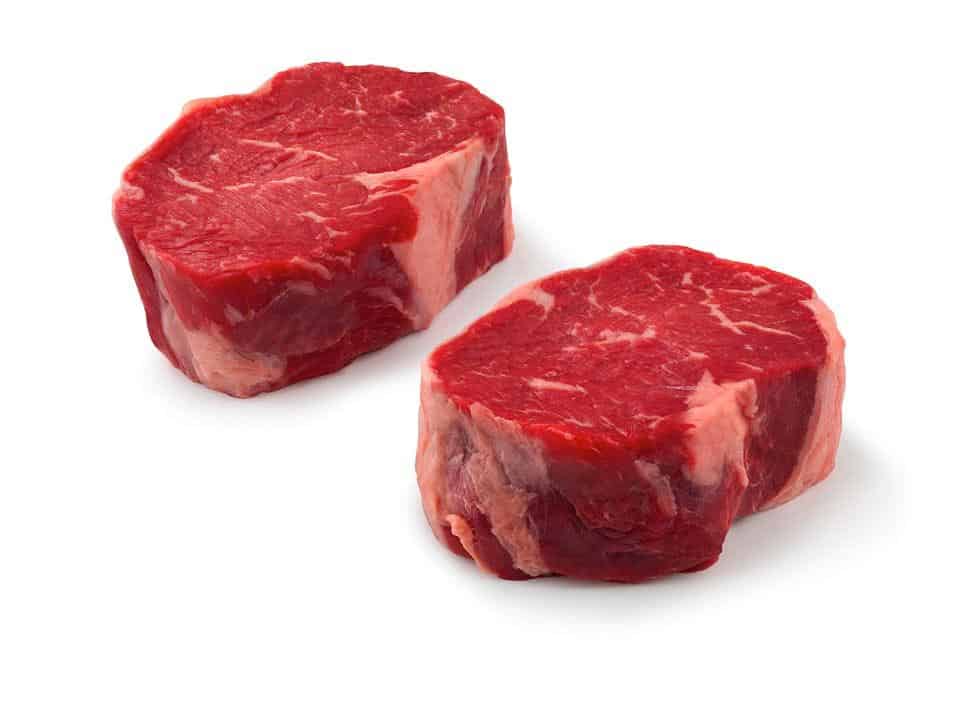 If you want a Ribeye, but want something slightly leaner, Ribeye Filets are where it’s at. Fun fact: the name “Filet” is a French word meaning “a solid piece of meat.” 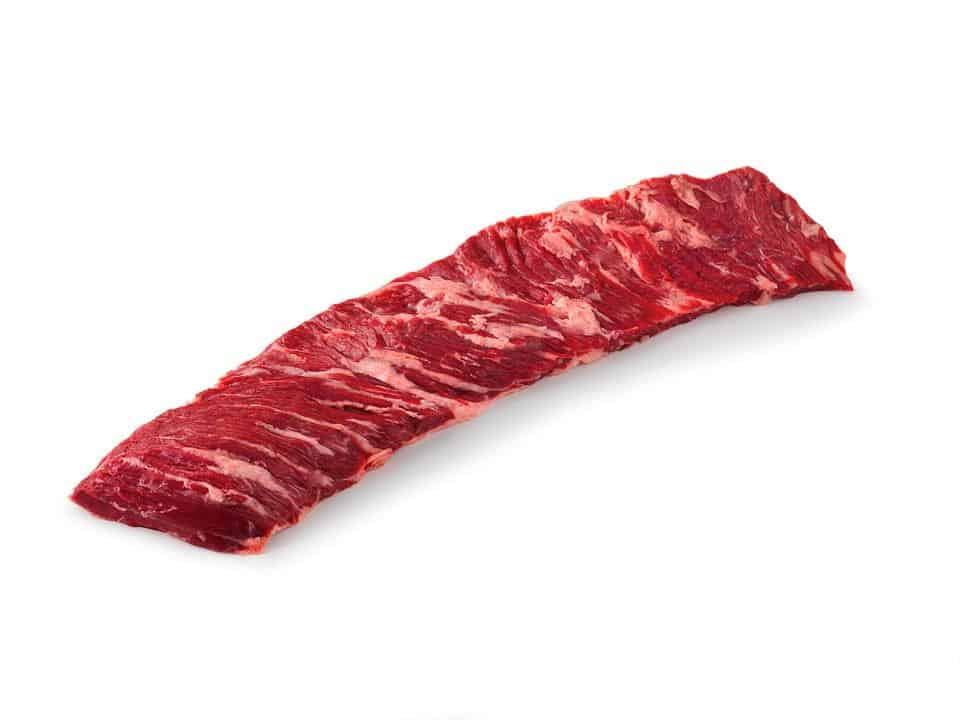 Have you ever had fajitas? Of course you have! And if you’ve specifically had steak fajitas, then you’ve enjoyed yourself some Skirt Steak. Skirt Steak is a thin, flavorful cut (due to the higher amounts of fat) that works best seared over high heat. Ya know, like fajitas! 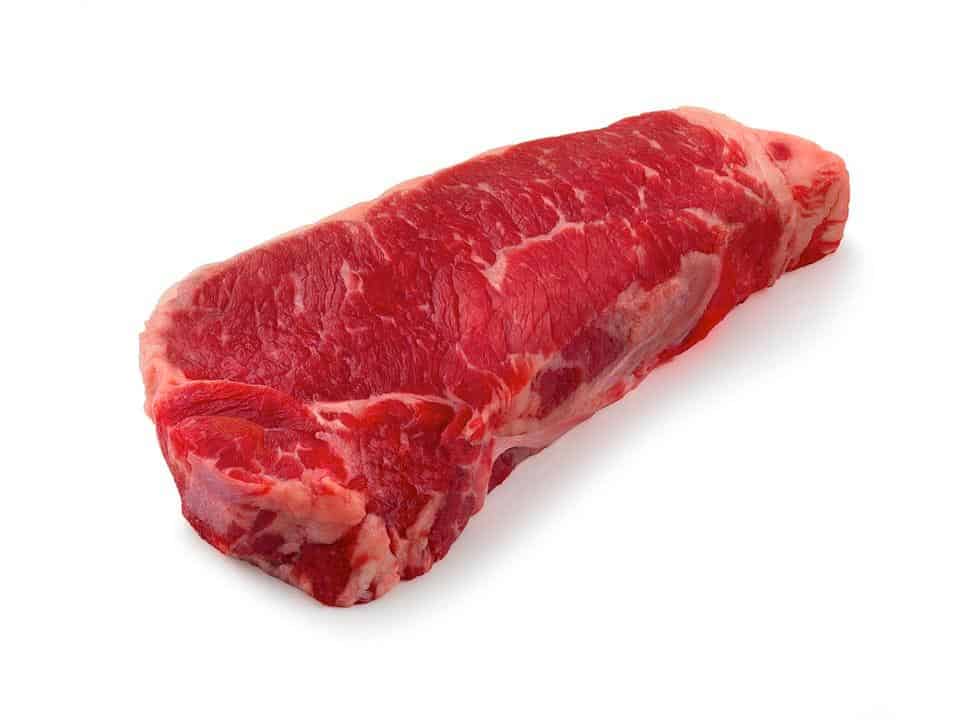 Another steak that is great for grilling! With only 6g of fat per serving, the Strip Steak is a great option to enjoy, especially due to the slightly lower price tag. 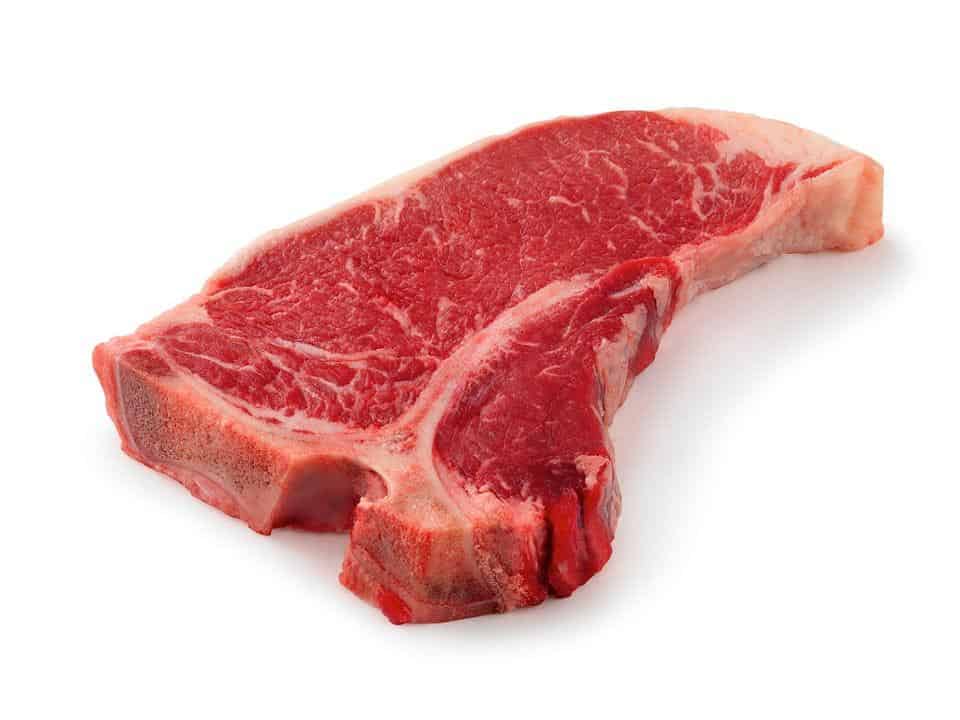 T-Bones are seemingly the go-to steak in movies or on TV. If you were asked to draw a steak, a big T-Bone is probably the first thing to comes to mind. 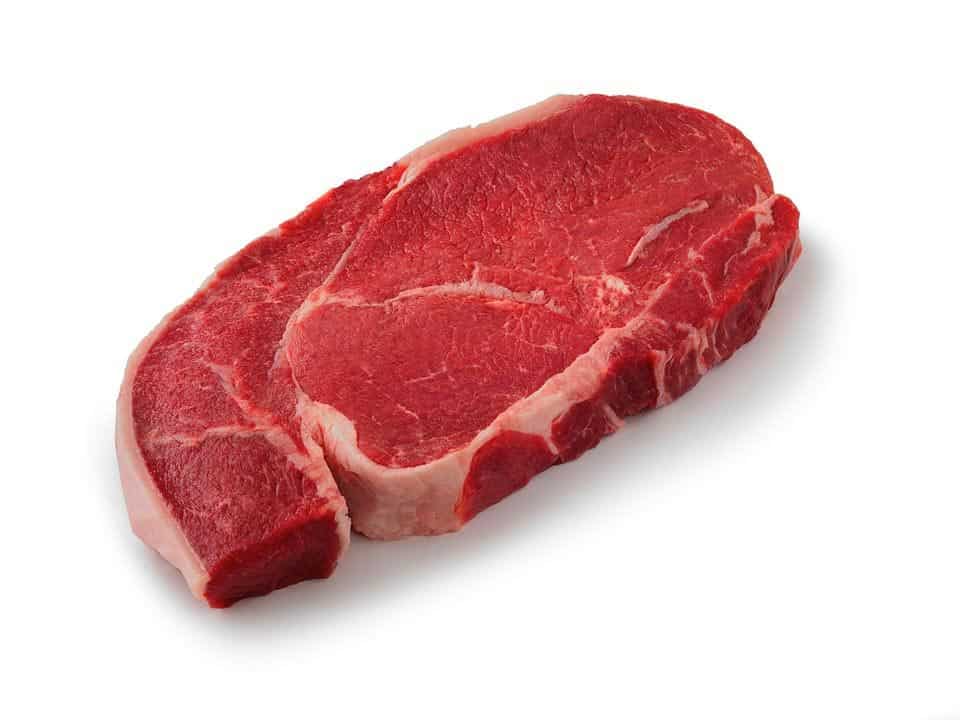 Sirloin Steak is one of my personal favorites! It’s full of flavor, but still very lean, making it great for grilling. If I don’t feel like spending money on a tenderloin, this is the next-best thing! 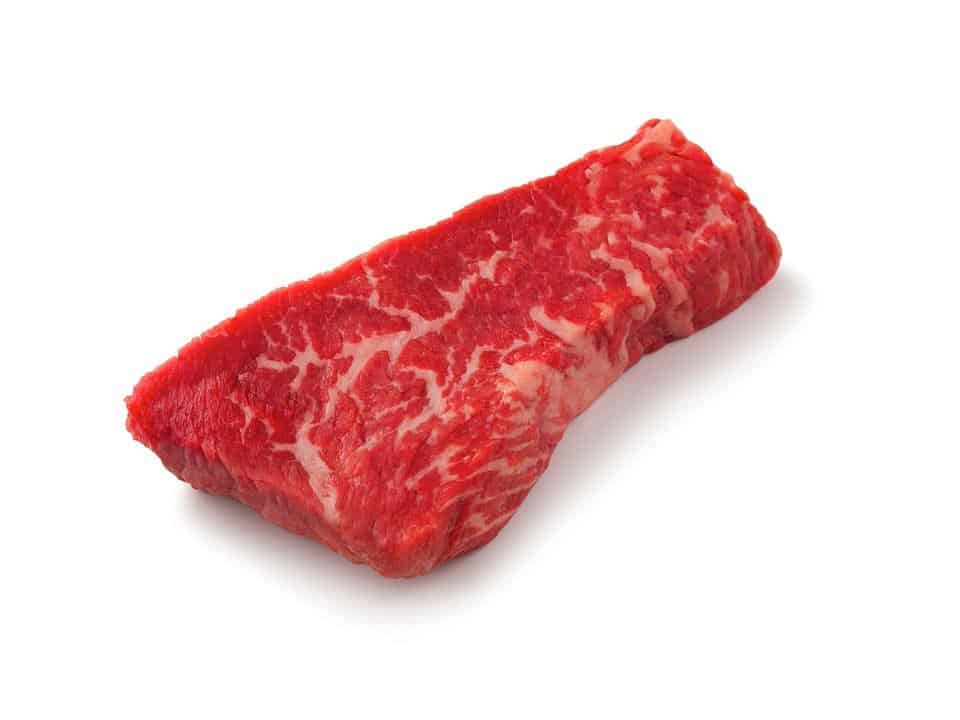 Tri-Tip Steak is NOT the same thing as Steak Tips, I came to learn! Steak Tips are one of my absolute favorite ways to enjoy steak- they’re basically lean cuts off the tip of the sirloin, and they’re magical.

Tri-Tip is a specific cut of sirloin, with its triangular shape giving it its name. In doing some research, I learned that it is actually very popular in California. Being a New Yorker myself, this is news to me, but I’m sure a ton of you reading this already knew that.

Summary: how healthy is steak?

I’ll be honest: growing up, I thought all steak was unhealthy. I saw all those huge, fatty steaks (like T-Bones) and knew that there was no way they could be healthy.

But after doing my own research and learning more about steak, it quickly became obvious to me that steak can be a GREAT option! Sure, not all cuts of meat are the same. And while this guide shows some very lean meat, if you’re ordering steak, there is going to be much more fat involved.

At a restaurant, they may not do all the trimming because they want to leave those juicy “fat caps” on the steak. This helps the overall flavor (since fat melts a bit when cooked), but the odds are that you’re not eating that entire fat cap. So, hopefully this guide can help you get a solid understanding of the nutrition you are actually consuming with each steak!

The New York Strip steak delivers an enormous 24 grams of protein per 4 ounces. It also has the least fat of any loin cut (17 grams, compared with 20 or 21 grams in other loin cuts).

This content is created and maintained by a third party, and imported onto this page to help users provide their email addresses. You may be able to find more information about this and similar content at piano.io

New York strip, filet mignon and rib-eye are three different cuts of beef that are frequently used to make a juicy and delicious steak. Both the New York strip and the filet mignon are cut from the tenderloin portion of the cow, while the rib-eye is cut from the rib portion. Choose a low-fat, low-sodium marinade to keep your steak healthy, and consider grilling rather than pan-frying to reduce the amount of fat.

New York strip, filet mignon and rib-eye are considered part of the protein foods group. According to ChooseMyPlate.gov, women should consume 5 to 5 1/2 ounces of protein a day, while men should get 5 1/2 to 6 1/2 ounces. The Institute of Medicine recommends consuming between 46 and 71 grams of protein per day. These cuts of beef provide between 24 and 43 percent of the daily recommended intake of protein.

I am glad and I will wait as long as you say, but do not delay, otherwise I cannot live without you. Lisa clarified, not knowing why, probably, anticipating the upcoming difficulties, whether he would later reproach her with the fact that she was not free.

He laughed: - What nonsense. This is the past, everyone has it. Calmed down, the girl jealously asked, why, and he has a secret past.

Katya, please take off all your clothes, sit next to me and tell me that you will drink. The blonde looked away from me - I was going to drink whiskey and cola. She got up from her chair. Is she really going to undress now like that.

Yes - she answered shyly. I dug into her ass all the harder, opening the anus and pushing my fingers to the very end. So they at least lubricate your hole.

This rogue arranged hypnosis for us, - Tanya was indignant, - return to the beach. I returned. No one foresaw such a problem, how can girls prove their unearthly origin. Lizonka came to the rescue, she was tired of making fun of the police. A terribly beautiful red-haired girl with emerald eyes lay down next to me, the savages became sad.

Here without you chords